Is That a Gun in Your Pocket?…

Posted by Eddie Pasa on September 28, 2016 in Movie Reviews / No Comments

The new comedy Is That a Gun in Your Pocket?… doesn’t present anything new. Whether you’re a gun rights advocate or a gun control advocate, there’s plenty in this politically-even-handed film that will, by turns, either make you laugh or enrage you. Not even its story is new – it’s based on Lysistrata, a comedy by Aristophanes from 411 B.C. What makes you stand up and take notice about Is That a Gun in Your Pocket?…, however, is its charm, given in spades by writer/director Matt Cooper’s screenplay and the buoyant performances his cast delivers. 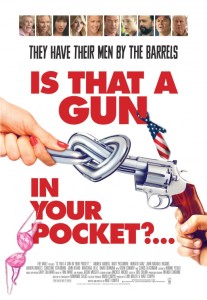 When I say this film doesn’t present anything new, I mean it in the political sense. The standard arguments for and against gun control are all satirized here after small town child Lance Keely (Garren Stitt) brings his father’s handgun to school for no other reason than to show it to a friend, and it goes off when said friend grabs at it. Of course, people are going to come out swinging on both sides, saying that this was an isolated incident and the majority of gun owners are responsible people, with the other side saying, “Well, how did this kid even get his hands on a gun?”

Even before this incident, we know we’re in caricature land. The town’s motto, as seen on its welcome sign, is “Live Straight, Shoot Straight,” with rifles underlining those words. What’s more, if we look above the sign, are the three things the folks of Rockford, Texas hold dear, shown in silhouette: farms on the left, an oil derrick on the right, with a big church smack dab in between. This sign alone defines the bulk of Is That a Gun in Your Pocket?…, as we see the Rockfordians as a relatively harmless, God-fearing, gun-obsessed people. A little oversimplified and exaggerated, but as this is satire, it’s supposed to be that way. 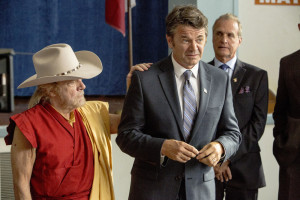 Yet when the gun goes off in the school, Lance’s parents Jenna (Andrea Anders) and Glenn (Matt Passmore) are immediately set on opposite sides of the fence. Glenn’s first seen with his hunting buddies, so we know what side he’s going to fall on; Jenna wants to do something to make sure this can’t happen again. Meeting with her neighborhood gossip circle – which includes a gloriously brash and obscene Cloris Leachman as the elder stateswoman of the group – she decides to withhold sexual activity with Glenn until something is done about the guns. Pretty soon, the other women withdraw their favors from their men in support, and faster than you can say “awkward boner,” the town’s split almost straight down the (literal) sexual divide.

Propelling this whole crazy train forward are sweet, charming performances by all involved. The town of Rockford is meant to represent a slice of small-town Americana, so there are many differing personalities, of course – the apple-pie Keely family; Dexter (Max Lloyd-Jones), the town horndog who can’t keep it in his pants, much less keep a secret; the token non-Caucasian family, represented by Luis (Horatio Sanz) and Connie (Fernanda Romero), at their stereotypical-Hispanic best, surrounded by many other characters with many other quirks. But as John Mellencamp once sang, “Ain’t that America, home of the free?” 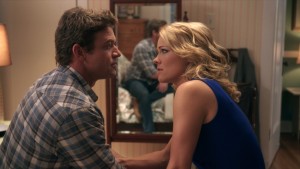 Cooper’s screenplay is very broad and hits the nails on the head a little too hard, but it takes shots at everything and everyone on both sides of this debate. However, to lessen the blow, it helps that everyone’s painted as a caricature. All sentiments, both pro- and anti-gun, look farcical when coming from the various people who espouse them. However, when all is said and done, the film really isn’t about who’s right or what gets done as far as guns; it’s about being civil to each other in an era where incivility and rudeness is the norm. Is That a Gun in Your Pocket?… doesn’t seek to give you the answers to our problems; instead, it gives us a noble starting point from which the answers might stem.