Posted by Michael Parsons on May 25, 2016 in Commentary, Interviews, Movie Reviews / No Comments

Sevé  Schelenz is just a regular everyday guy trying to make a difference.

It’s been five years since my one and only meeting with the director, when Schelenz’s creepy minimalist found-footage flick “Skew” left much to our imaginations at the 2011 Spooky Movie Fest in DC (it went on to great distribution, including a one-year Netflix run in the U.S.). FaceTime bridged the 3,000 mile gap between DC and Vancouver for our second face-to-face, which comes just prior to the Canadian Premiere of his most recent film “Peelers”, a slight deviation from the minimalist, relatively gore-free psychological thriller of his previous effort.

Jumping ahead for a second: the last question I asked Sevé before we concluded our casual convo concerned the most ridiculous thing that happened on set. Unfortunately for our 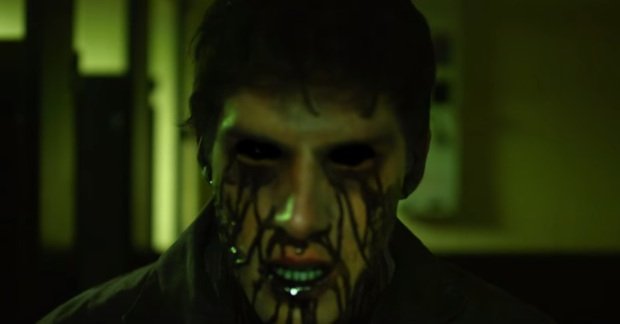 readers, the answer is too revealing to expound upon, but I will say that it involves Craigslist, honey, and a couple of extremely trusting strangers.

The point is, Schelenz hates spoilers. In fact, the director almost muted our call because I used one too many adjectives to describe the new “Captain America” movie. As an indie filmmaker, he holds sacred the days and weeks and months and years it takes for a project to come to fruition, especially the painstaking effort it requires to surprise an audience. (My review of the “Peelers” U.S. Premiere in Palm Beach isn’t too spoilery, in case you’re wondering).

Schelenz describes “Peelers” as a fun stripper horror film with heart. The film stars Caz Odin Darko, Madison J. Loos and Wren Walker, who plays Blue Jean, an ex-stripper and owner of the club on its closing night. The establishment comes under siege by a nasty plague of sorts, after a group of jovial coal miners start erupting infectious black sludge from every orifice.

The movie is part drive-in/midnight horror flick and part clever commentary on everything from the female horror stereotypes to the environment (and for up-and-coming FX folks, the delicate craft of making boob molds). While it’s mostly tongue-in-check, Schelenz didn’t want a 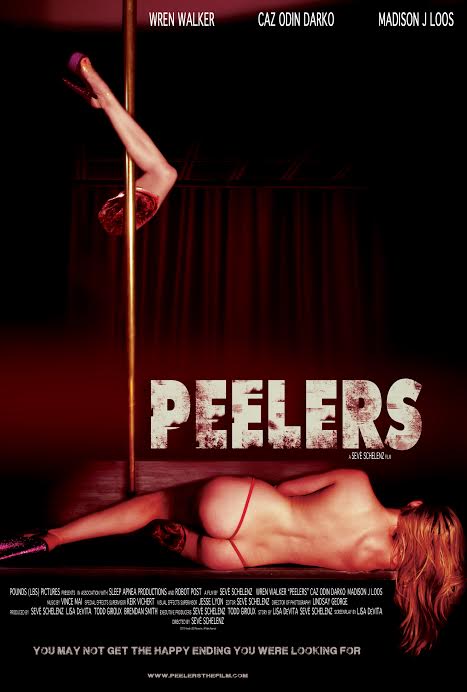 full-bore parody. Friend and screenwriter Lisa DeVita has knack for comedy, as does Schelenz, but the director wanted to dial it back a skosh and use comedy where it was needed to break up gory action sequences.

As the main protagonist, Walker is in almost every scene. “We had open auditions and Wren came out halfway to the end,” recalled Schelenz. “Her boyfriend encouraged her to read for the part. She kind of reluctantly came out and was fantastic. We offered her the role, and she was over the moon.”

But there’s nothing reluctant about Walker’s character. Blue Jean is a badass. She’s a business woman, a negotiator, a physical presence. She’s also an avid baseball fan, via Blue Jays loyalist Schelenz, who taught her how to throw a pretty mean fastball. (Plenty of unintentional baseball puns to follow).

”I wanted the female protagonist to be this strong character,” said Schelenz. “So I went to Lisa and started pitching it to her. A lightbulb went on in her head. And she said, you know what? Something happened to me in Las Vegas. And that sort of became the catalyst of the script. 90% of the film is from her. It’s from her mind, her personality… obviously I edited it, changed it a little to clean it up before it got to the big screen.”

The concept had been percolating for some time. “I knew coming off “Skew” that I wanted to do a more traditional style film…with angles, proper lighting, a DP,  and get away from found footage. “Skew” did really well–we got 50 festivals, a bunch of awards and good distribution in a bunch of countries. My sales guy came to me and said what else you got? I had a few 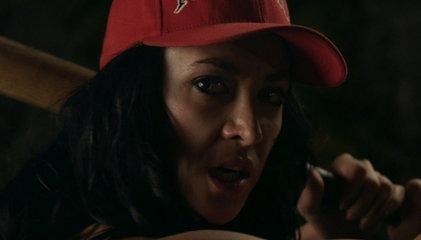 things in the works…a comedy, a sci-fi. He said, No you’re doing another horror. I asked, what sells?  And he said: more blood and more boobs. But I wasn’t interesting in just pumping out another movie.”

”So I thought: where would you always see boobs and it would be accepted or logical? Any horror movie you ever see, somebody gets naked. I did a little research, and surprisingly, there weren’t a lot of stripper horrors. And particularly, not a lot of good ones.”

“Of course the one everyone always goes to is “From Dusk Til Dawn”, but that felt more like two films mashed together….Tarantino’s gangster movie then Rodriguez’s horror movie. Those are two filmmakers I respect a lot [because] you can just see how passionate they are about making movies.”

”Peelers” was shot in 16 days primarily in the municipality of Coquitlam in Vancouver, where Schelenz and Co.  negotiated a deal with the owners of a bar that was about to get knocked down. Getting into some of the technical aspects of the movie: “[DP] Lindsay George was phenomenal. She’s fast, she gives good shots and she knows lighting so well–the three major things you need when working on an independent film. Also, it was good having a female DP on set, because you’re dealing with actresses who have to get naked all the time. Lisa [DeVita], who was also a producer, was also on set.”

Not to mention a cohesive cast. “We had a long pre-production, so the actors got to know each other ahead of time. A lot of that actually shows on-screen.”

The Canadian Premiere of “Peelers” is this Saturday, May 28th at Shock Stock Film Fest in London, Ontario.