Posted by Michael Parsons on April 8, 2016 in Movie Reviews / No Comments

I could probably wrap up my feelings about “Demolition” in a couple of sentences, but I’m obligated to write at least 400 words, so enjoy the diatribe. The film, directed by Jean-Marc Vallée of “Dallas Buyer’s Club” and “Wild”, is one of the more aggravating experiences I’ve had at the theater this year. I mostly blame the meandering screenplay, but I’m pretty sure the talent read it before getting involved, so they’re not entirely off the hook.

“Demolition” is a character study of someone who has virtually no character. Davis Mitchell (played by Jake Gyllenhaal) is a young investment banker who survives a car crash that kills his wife Julia (Heather Lind). Shock might explain Davis’s initial reaction to the tragedy, as he goes about his daily business unfazed, but it turns out that he’s just kind of a shithead who is numb to the world. 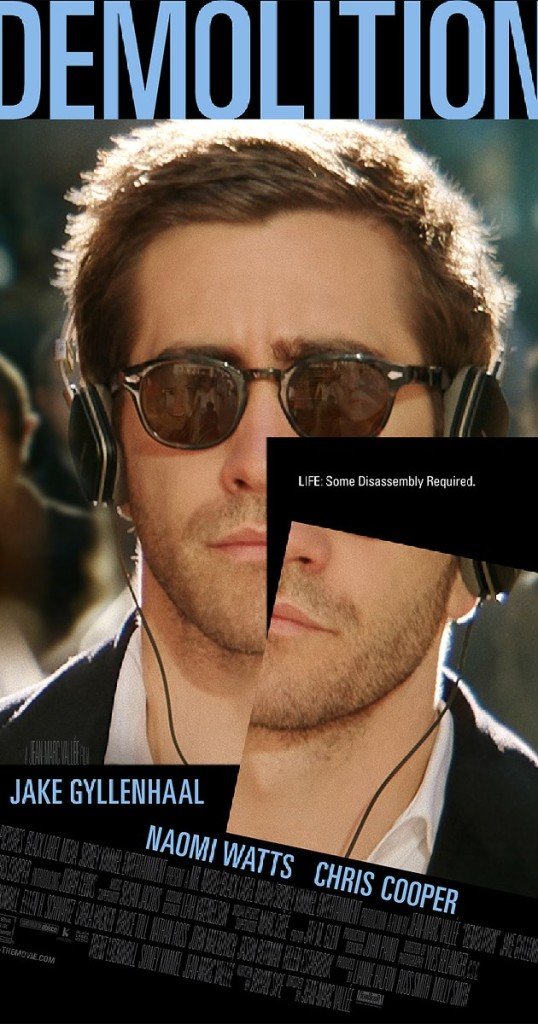 Gyllenhaal was praised for his portrayal of a sociopath in last year’s thriller “Nightcrawler”, a character that wasn’t designed for any kind  of dramatic catharsis but rather functioned as a symbol of our ruthless media culture. In “Demolition”, he’s virtually the same dead-eyed guy, but no more than a poster child for sudden-onset OCD. We’re asked to endure an interminable arc of closure where, at long last, a tear is finally shed for his deceased beau after putting his family through the ringer. “There was love between us,” he mutters to his distraught boss/father-in-law (Chris Cooper). Way too little, way too late.  Mitchell is seized by an urge to dismantle things, from the squeaky stall door in the men’s room to his computer and eventually his house (it’s an ongoing metaphor for all the things he took for granted before his wife’s death–he actually acknowledges this for us dummies by stating “I’m taking apart my marriage”).

It all begins with a defective vending machine in the ER, where Davis is deprived of a bag of M & M’s and is compelled to write a complaint letter to the vending company for his refund. He ends up unloading his life story on paper, a clever narrative device that seems like it might be headed somewhere interesting. His letters reach customer service rep Karen Moreno (Naomi Watts), a single mom with a rebellious 13-year-old son (a very good Judah Lewis) who struggles with his identity. Who better to guide him through puberty than some random guy who straps on a Kevlar vest and hands the kid a pistol?

I’m not sure what Vallée is expecting us to feel for Davis—I can tell you his behavior made me wish that he was the one killed in the car crash—but the odd co-dependency he develops with Karen is painful, destructive, and ultimately pointless. All I saw were two selfish characters who are bereft of  judgement, and those around them get to pay the price (David thinks it’s appropriate to invite his new friend to an event in his wife’s honor, and she’s disgusting enough to accept). Cooper completely commands his scenes as the grieving father, easy to do when the film’s star is playing a wet rag.  The conclusion comes off like a big ugly joke–imagine Patrick Bateman having a guest spot on “Sesame Street”. Meanwhile, editor Jay M. Glen has his hands full trying to draw something ethereal or existential out of this vapid story with incessant memories/flashbacks a la Terrence Malick.

Writer Bryan Sipe’s other recent credit is the Nicolas Sparks-adapted dud “The Choice”, and if I had to choose, I’d  take the fluffy romance.  Gyllenhaal is a terrific actor (see my review for “Southpaw”), but “Demoliton” implodes early and digs around aimlessly in the rubble for the duration.