Here’s my take on sequels: a good sequel is supposed to be a creatively different movie than its predecessor. All of the greats – Star Wars: Episode V – The Empire Strikes Back, The Godfather Part II, Terminator 2: Judgment Day, Star Trek II: The Wrath of Khan – went a yard and a mile to endear themselves to viewers by carving out their own niches. If you’re not earning the audience’s respect by being a good standalone movie, you’re merely riding off the coattails of what came before, which – sadly – is what My Big Fat Greek Wedding 2 does. True, it’s cute in all the right places, but it’s sorely missing the heart that drove the original film to wild success. 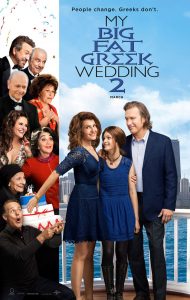 Instead, what My Big Fat Greek Wedding 2 becomes is a near-rehash of the first film, with a twist: the struggles from the original are seen from the parents’ point of view this time. That’s in addition to a myriad of other subplots and hooks that are dangled in front of us only to be dashed away and glossed over like a house painter putting on a fresh coat of latex. It’s a film full of heel turns, with characters starting down one track and abruptly seeing the light pulling them a different direction. Director Kirk Jones and writer/star Nia Vardalos seem to hope the chemistry and vibe will carry over from a film released 14 years prior, as if the mere reappearance of the Portokalos family will engender instant gratification.

Yes, to an extent, it may very well be enough. There’s a lot of twisted displays of affection and a few genuinely beautiful moments that make this film worth the watch. However, too many jokes and gags are reused, as if making other people say or do things from the first movie will make it fresh again. There’s an almost palpable laziness inherent as My Big Fat Greek Wedding 2 merrily bounces along, trying to put their hands on the gold medal they won in 2002 without doing what they need to actually win it. 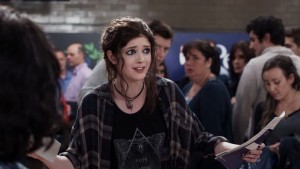 As the first film followed Toula (Vardalos) and her non-Greek boyfriend Ian (John Corbett) as they tiptoe around Toula’s hardcore Greek family in an effort to simply date each other, the second sees Toula and Ian as parents to fairly typical teenager Paris (Elena Kampouris). Well, “fairly typical” in that she wants to be seen as separate from her family members, who apparently have nothing better to do than follow her around and make her life hell by being the ostentatious figures they are. I mean, don’t these people have jobs and families to take care of? Every one of the Portokalos family is back for this one, and they seem to be more loudly intrusive than I remember them from the first film, pushing Paris further and further away.

On the face of it, Paris is just a normal kid. She likes boys, she’s smart, she loves her family, and she wants to lead the nondescript life every teenager wants. She’s also a high school senior with prom and college on the brain, and so begins the pressure to stay in Chicago coming from all sides, from her grandparents to her parents to her brash Aunt Voula (Andrea Martin), who continues to put herself in everyone’s business even if it’s not good for her to do so. Vardalos’ script tries desperately to give Paris an enlightening transformation, and Kampouris’ performance is to be commended; however, like most things in this movie, it’s glossed over and rushed in the script’s battle to keep things moving. 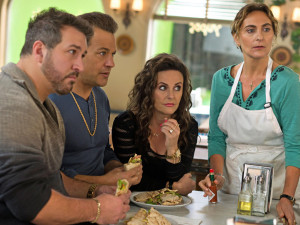 If that’s not enough, it’s discovered Toula’s parents Gus (Michael Constantine) and Maria (Lainie Kazan) aren’t legally married due to their marriage certificate not being signed. Well, it can’t be called My Big Fat Greek Wedding 2 without actually having a wedding, now, can it? Yet again, we’re subjected to all the pains that come along with preparing for a wedding – the dress shopping, worrying about the food, etc. – but it’s supposed to be more funny because this time, it’s Toula’s crotchety parents. Gus maintains his stubborn pride in being the patriarch of the family, while Maria suddenly finds that she may not like being considered the second fiddle. It’s an unexpected treat to see Maria rebel and take charge of her life, stepping into Gus’ role as the hardass for a little bit, yet it’s overwritten past the point of caricature and heads into the world of unfunny.

Suffering also are Toula and Ian, but it’s hard to see it; the script tries to make so much of their lack of togetherness and their busy schedules, but Jones’ direction doesn’t make us feel it. We see the two of them together all the time onscreen, so this particular plot point rings hollow to me. Is it a statement on helicopter parenting and Toula falling into her family’s rhythms? Seeing as how they put themselves in this position – Toula volunteering all the time for Paris’ school functions, Ian being the principal at said school – it’s hard to generate sympathy for them, especially when they have a loving, caring foundation like the Portokalos family, the members of which are more than happy to back them up. 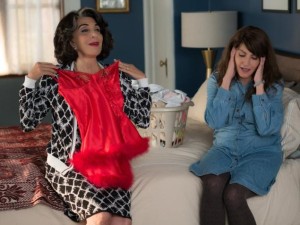 These plot points alone could fill an entire movie… but we keep getting pelted with little subplots that aren’t given the proper time or due to make us feel anything for them. Everyone’s got a side story, and it’s a whirlwind of a time keeping everything in order. It’s a constant parade of cute or trying-to-be-cute, with very few honest moments where the film slows down to take stock of itself. There’s even one moment that may make you tear up with its utter sweetness (keep an eye on Manayiayia, played by Bess Meisler). However, it’s one moment in a film full of rehashed comedy, as if doing the same shtick will net the same results. My Big Fat Greek Wedding was lightning in a bottle; My Big Fat Greek Wedding 2 is a bottle with no lightning in it. It’s as cute as the first film, but that’s not necessarily a good thing.