With non-fiction-based films like Lone Survivor and 13 Hours: The Secret Soldiers of Benghazi, I often wonder what the point of these films are. Is it to show the courage and bravery of the American soldier under extreme duress? Is it to give the American public a glimpse into the lives of the people paying the price for their freedom? Is it to arouse chest-thumping patriotism in the viewer? Is it to stir some kind of political point that gets hammered on in an election? We’ve been watching movies like these for years, and sometimes, I still feel like I don’t get it – what the story is trying to tell us or if the filmmakers are merely sensationalizing the military by making action films out of their soldiers’ lives. 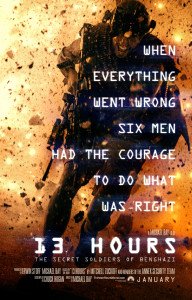 Regardless, 13 Hours: The Secret Soldiers of Benghazi (hereafter referred to as 13 Hours) almost feels like a vivid interpretation of an internet encyclopedia entry on the 2012 attacks on both a US diplomatic outpost and a nearby CIA annex in Benghazi, Libya. Director Michael Bay has chosen a straight-up approach without political grandstanding or editorializing, a trait shared with the film’s source publication, “13 Hours: The Inside Account of What Really Happened in Benghazi” by Mitchell Zuckoff. I know at least one of you is saying, “Ugh, Benghazi as brought to you by the director of Transformers and Pearl Harbor. What?” To this, I say: take the film as I take every film – on its own successes and failures. 13 Hours largely succeeds, thanks to Bay’s assured hand with handling action sequences and his innate way of making characters distinctive and care-worthy.

It’s not an easy feat to take a firestorm political issue and boil it back down to its essentials without perceiving some slight or another, but Bay does exactly that. He presents us with the event itself and the people involved with it, avoiding any messy finger-pointing or blaming. Believe me, there are some shots and instances in the film which speak for themselves without any political slant, if only to indict the torturous red tape and the bureaucratic process of getting help to those who need it. 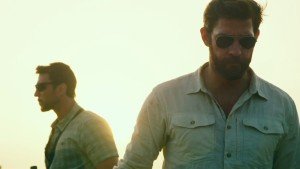 What results is a fairly cut-and-dried contrast between protecting American interests overseas and protecting American lives in a hostile environment. How far are we willing to go to do both? Is intelligence-gathering positioning more valuable than human life? That’s the crux of the whole movie, as we see a smarmy man simply called The Chief (David Costabile) – the senior CIA agent overseeing operations at a clandestine CIA annex in Benghazi – try to call the shots in order to maintain a covert US presence in Libya at all costs, even when an American diplomatic outpost a mile away comes under attack by Islamic militants.

Of course, this doesn’t sit well with the security force assigned to the annex, the members of which are the focus of 13 Hours. The film’s first act sets them up as hardened military operatives in a land that doesn’t want them there; immediately as the film starts, we see team leader Tyrone Woods (James Badge Dale) and new arrival Jack Silva (John Krasinski) in an armed standoff with a Libyan militia. In a place where each step you take could be your last, these men not only dryly accept this way of life, but they challenge it as well. So when the outpost is attacked, with US Ambassador J. Christopher Stevens (Matt Letscher) and his security detail coming under fire, it doesn’t take long for them to defy The Chief’s order and mount a rescue operation, which would lead to a fateful last stand at the CIA annex itself.

We meet the six-member Global Response Staff (GRS) through the usual Michael Bay getting-to-know-you routine, but it feels different this time. These are soldiers with families and lives they want to get back to, weary of the jobs they have to do that separate them from their families, and going stir-crazy from being cooped up in a compound surrounded by people who may just want to put a bullet in their brains. Most of the time, we see them in full operating status, weapons at the ready, eyes scanning the landscape for potential threats. In their downtime, we see their personalities come through as thoughtful, pensive, and focused on making it back to the ones they love.

I hesitate to label 13 Hours as an action movie, as that moniker is usually given to fluff films where the villains all take turns firing when the heroes are safely behind a cement pillar or something like that. Here, we’re watching a dramatization of factual events that involves suspense and action, and it’s all been wonderfully portrayed by Michael Bay and his crew of actors who work at their best to maintain the dire urgency of their situation. What I like about Bay’s direction this time is that his staples – the rough-and-tumble leads, the frantic pacing and editing, the explosions, and even the bomb’s-eye view shot he made popular in Pearl Harbor – are all used chillingly effectively. The aforementioned Pearl Harbor shot may take you out of the movie a bit, but when you see what it’s about to hit, it actually serves a purpose greater than being a cinematic device. 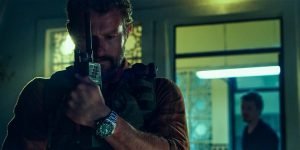 Thankfully, political leanings are left out of this film; however, that doesn’t mean the lack of stateside support doesn’t get shown in a sort of frustratingly comic manner. A terrific example of this is CIA operative Sona Jilliani (Alexia Barlier) desperately calling for not an airstrike, but a simple flyover to scare the militants away… which results in the next edit showing an airfield full of fighter planes with their wings up and nobody around or in them. It’s a specific type of gallows humor that gets thrown at us, and we don’t know whether to laugh or throw our hands up in exasperation and disbelief at the inaction.

I believe 13 Hours: The Secret Soldiers of Benghazi stands as one of Michael Bay’s finest, being a balanced, riveting film about the heroism of a few against the evil of many. This story and others like it are a testament to the bravery of those who step into the line of fire for their fellow man and to recognize the ultimate sacrifices made. These films aren’t made to make you stand up and cheer; these films are made to make you remember and think about the other side of American freedom. So after thinking about the film for days and wondering what its purpose is, I think I finally get it.