Posted by Eddie Pasa on September 2, 2015 in Movie Reviews / No Comments

I’ve wrestled with this one for two weeks, and it’s late in coming. How do you take on a film that combines the best of Kahlil Gibran’s classic literary work “The Prophet,” stunning animation, and a very similar story to that of Jesus Christ? This is how I perceived Kahlil Gibran’s The Prophet, a new animated film meant to bring Gibran’s words to a new audience. Consider me part of that audience, as I must have read “The Prophet” maybe once in my life, and it was so long ago that I can’t remember much of the book. 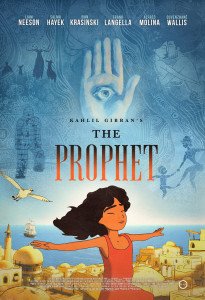 What I do remember is its Beatitude-like teachings about how to live your life, not necessarily for the glorification of God, but for the betterment of yourself and those around you. Yes, the divine has its place, but so do we, as humans on our own and in each other’s lives, which is what I took from the book as a Catholic high school student.

Roger Allers, co-director of Disney’s 1994 classic The Lion King, gives us the story of Mustafa (voiced by Liam Neeson), a poet and philosopher currently on house arrest for inciting revolts seven years prior to our story’s opening. We’re introduced to him by way of the mute Almitra (Quvenzhané Wallis), whose voice was taken the day her father died, and her mother Kamila (co-producer Salma Hayek), who’s charged with housekeeping duties in Mustafa’s prison hut. 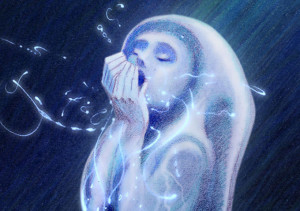 Of course, who else but Neeson could possibly have the voice for Gibran’s words? He voices Mustafa to perfection, giving the text of “The Prophet” renewed life, vigor, soul, warmth, and – most importantly – simplicity. The character of Mustafa is a very Christ-like figure, persecuted for speaking truths to power, and seemingly released to be sent home, only to find darker machinations looming around him.

However, on his way to the city seaport where his boat home awaits, he finds time to dish out wisdom to a wedding party, to various townspeople, and to Almitra herself, as she and Mustafa have grown fond of each other in this short time. Each stop is a lesson from “The Prophet” brought to vivid, imaginative life by Allers and 9 other directors, each lending their own specific talent and trademark style to illustrate Mustafa’s teachings.

The power of The Prophet is aided by achingly beautiful songs from Damien Rice and a tune Glen Hansard and Lisa Hannigan, all of which use Gibran’s text as their lyrics. I like to think of The Prophet as philosophy by way of Disney (not involved in this project), as we start the film with a scene that’s almost right out of Aladdin, proceeding straight into the developing dyad between Mustafa and Almitra. The resulting film goes to wondrous lengths to magically demonstrate love and respect through the eyes of those that live it.