Sleeping With Other People

The disastrous minefield that is the current dating arena is a tough one to navigate, as Leslye Headland’s Sleeping With Other People so humorously demonstrates. Our own personal hang-ups, issues with other people, and external expectations of how to comport oneself in the adult dating world influence our every decision, sometimes bringing too much of one specific thing to bear upon any kind of relationship in which we may find ourselves. 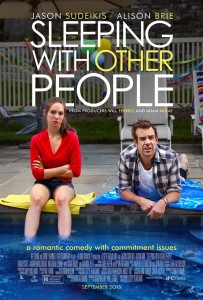 Sleeping With Other People is a stiffly pointed finger and a hearty “J’accuse!” in the direction of our libido and how badly it can lead us when our hearts aren’t synched fully with it. The film presents two exaggerated opposites of the outlook in the dating scene, represented by Jake (Jason Sudeikis) and Lainey (Alison Brie), two modern New Yorkers who’ve known each other since one fateful day in college when he sees her going psycho outside her boyfriend Matthew Sobvechik’s (Adam Scott) dorm room. With the resident assistant threatening to throw Lainey out, Jake fakes knowing her to keep her in the dorm. Going along with his play, Lainey finds herself getting to know Jake a whole lot more than expected, spending the day with him and capping off the night by losing their collective virginity to each other.

Some years later, after not having seen each other since that night, Jake and Lainey find themselves face-to-face again, only this time sporting some serious damage. Where do Jake and Lainey meet again for the first time? At a sexual addiction meeting. Jake’s a serial Lothario, jaded after being in empty relationship after empty relationship, often ruining his current dalliance by finding another warm body to use. Matthew’s hold over Lainey hasn’t broken at all, even as he’s about to get married. She’s written to be holding out in hopes that one day, Matthew would choose her; instead, she’s merely holding on to some wispy vestige that his “romantic” gestures mean anything. 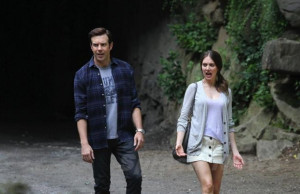 Both are there at the behest of others: he’s there because his girlfriend told him to go or she’d break up with him (which she does, anyway), and she’s there because her friend Kara (Natasha Lyonne) thinks this’ll help get Lainey out from under Matthew (figuratively and literally). However, they’re determined to break the cycle of wanton lust and opt to remain friends with each other, coming up with a safeword (“mousetrap,” which is short for a nightmarish phrase) to stop them when they say or do anything overtly sexual, thereby threatening their newfound friendship. They become as close as two people can get without being classified as “a couple.”

It’s easy to fall in love with both of them, as Sudeikis uses his normally easygoing, charming persona to great advantage, while Brie is every bit the wild combination of the girl-next-door and a stunning temptress. Both of them play well off each other, oozing wit and sharing a great chemistry which makes Headland’s script (which is, in itself, an almost-homage to Mike Nichols’ 1967 film The Graduate) pop and glisten with brio. It’s devilish fun to see them actively try not to fall into old habits, each coming quickly over the top at the other with false bravado, trying to head off shenanigans. Sudeikis is just as funny as he was on “Saturday Night Live,” and Brie matches him beat-for-beat in the laughs department. 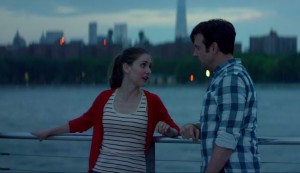 But it’s in their quiet, figuratively naked moments where these two shine the brightest. Where all their façades have been stripped away and they’re being honest with each other. Sudeikis plays Jake as being palpably contrite and believable in his want – nay, need – for Lainey to continue to be in his life, and Brie is at her best when she’s opening herself up and allowing us to peek behind the curtain to see her vulnerabilities and how much she also needs Jake.

Sleeping With Other People isn’t “will they or won’t they?”; it’s “they did, but will they again?”  Throughout this ersatz couple’s “relationship,” we see some of the best that friendship can have to offer: a shoulder to cry on, a sounding board for new ideas, and someone genuinely there for the other. When we get to the film’s climactic scene in the middle of the third act, it’s almost too much for us to handle, as we’ve been through the emotional wringer on both sides. However, what happens and what’s said between Jake and Lainey may just be the solution to all of their problems, even if the film has its torturous way with us before getting there.