Within the same week, we cover both the libidinous Sleeping With Other People and the more chaste Meet the Patels, a documentary comedy film by siblings Ravi and Geeta Patel which humorously blows the doors open on the Indian cultural pressure to marry and have children quickly. Ravi and Geeta, both industry professionals on either side of the camera, make good (if not comically makeshift) use of their charming storytelling abilities to tell us about Ravi’s life as a single Indian-American whose parents Vasant and Champa are breathing down his neck to give them grandchildren. 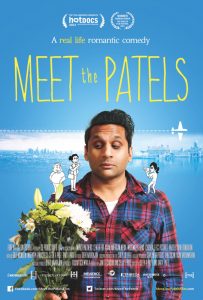 Meet the Patels offers a divided view of the culture clash between American and Indian values regarding marriage. You all know how Americans view marriage: dating and courtship which leads to falling in love, the grand wedding, the house in suburbia, the white picket fence, and the 2.5 kids. As told to Ravi by his family and his family friends, Indian marriages are largely arranged by parents; in one instance related to Ravi, the bride and groom met and were married within five minutes. Ravi, however, wants to marry for love.

Early in the film, he tells us of how he’s been leading a double life and how tired he is of it. When on his own, he acts American, speaks English, and has been dating Audrey – a redheaded Caucasian girl – without his parents knowing about her. In his parents’ presence, he reverts to speaking Gujarati and practices all the customs expected of him. This is the crux of the movie, and we spend the film’s 88 minutes watching him try to straddle the line between the two. It’s bothered him to the point where he breaks up with a girl who loves him very much, but she can’t waste time hanging around waiting for him to catch up.

Meet the Patels alternates between cutely funny and screamingly funny. Throughout the film, we see footage of Ravi catching up with family members and quickly-edited montages of ALL of them asking him, “When are you going to get married?” or saying “You have to get married now.” It’s like a rule or a step in life that’s just as mandated as breathing or putting one foot in front of the other when walking. Oh, and did I mention that his parents wish him to be married to another Patel? Not necessarily a family member, but someone with the same last name? 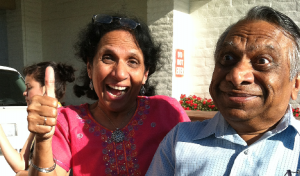 The level of organization that goes into making these matches versus the simple act of finding someone and dating is bewildering, even to Ravi. There’s biodata – résumé-like pages of personal information – shuffled around the families in hopes of matching Ravi with a potential mate. There are websites and conventions for matching Patels together. Indian wedding season isn’t off-limits, either. However, there’s a sweetness and joy Geeta’s camera picks up which shows the other arranged couples making the best of their lives together. No matter how laid-back or contentious, each mate is shown to enjoy the other and the discoveries that lie within.

We’ve all said at one point or another, “If they made a movie about my life…” Ravi and Geeta Patel went and did it, and it’s just as brilliant as its scripted brethren. Highlighting the cultural differences between Ravi and his parents is just one of the many facets Meet the Patels shares with us. It’s a goofy, nakedly unpolished, and honest look at the variations of love and marriage, edited for maximum humor and told with just as much care.