I’ve got a soft spot in my heart for films about cooking, which usually wind up being romantic comedies or films about coming to terms with life itself. No matter how sappy or predictable they may be, there’s something magical about watching disparate ingredients come together to make edible expressions of oneself. I’m also a sucker for underdog movies, corniness and melodrama be damned. 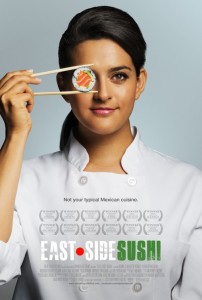 Therefore, it should be no surprise that the extremely likable and quiet-toned East Side Sushi has found its way into my heart. Anthony Lucero’s story breaks down cultural, gender, and racial barriers for the love of food, and it’s a valiant – albeit a little long-winded – effort. Its near-documentary style puts us right on the front lines in the kitchen of an Oakland sushi restaurant, where Juana Martinez (Diana Elizabeth Torres) has just been hired as a line cook.
As the daughter of fruit vendor (Rodrigo Duarte Clark) and a single mother to daughter Lydia (Kaya Jade Aguirre), Juana is an accomplished kitchen worker, helping her father cut and sell fruit out of their cart. Violently robbed at gunpoint for all the cash they have, Lydia looks for a more stable and safe position in more conventional kitchens; Lydia needs her tuition paid and a new uniform, and they’re cutting hours at her father’s job, possibly necessitating staying with the fruit cart.
She quickly proves her worth after landing a kitchen assistant position at a sushi restaurant called Osaka, doing deep prep work while observing the sushi chefs – all male and all of Asian descent – manipulate rice and fish into creations of artistic and culinary wonder. The owner, Mr. Yoshida (Roji Oyama) is a strict, forbidding man whose adherence to tradition forestalls any kind of training given to her by sushi chef Aki (Yutaka Takeuchi). However, it’s too late – Juana’s passion for cooking has been re-ignited, and she devotes herself fully to becoming the best sushi chef she can be. 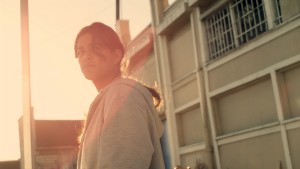 America is a melting pot, and East Side Sushi is one of the finer examples of how cultures come together for something totally new and fresh. Here, we have a Latina woman trying to forge a career as a Japanese cuisine chef in Oakland. Juana has a hell of a time trying to break through Japanese tradition to be recognized as anything close to an equal as far as sushi mastery. She stays up late practicing her craft, making mistakes, introducing food to her family which they may or may not like, and putting up with ingrained sexism and racism from her superiors, all while trying to keep the roof over her family’s heads.
Lucero’s languid, leisurely pace captures everything about Juana’s life – her dreams, her hard work, and the quiet moments in between, some of which may go on a little too long. Some may call it tedious; others may call it exactly what this story needs, to make us feel the awkwardness of the waiting game Juana has to play. I fall somewhere between these two, as some of it is indeed necessary; other times, it feels like the already-horrible odds Juana faces are being repeatedly hammered into us, which winds up being East Side Sushi‘s only failing. 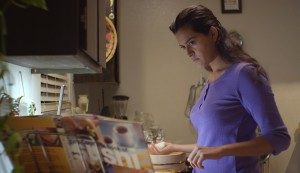 However, it’s more about watching Juana’s work ethic, dedication, and passion for the food itself that drives this film past any perceived tedium. Torres should also be recognized for her brilliant performance as a harried mother, a frustrated daughter, an unrecognized genius, and someone trying to make herself happy. She has to wear a lot of hats in this movie; like any good person in her position, she balances all the roles well, and she still has time to make sure that her daughter is cared for and loved.
As the centerpiece of East Side Sushi, Torres holds her end down well, like good chefs on the line do when orders start coming in and pulling them every which way at once. Lucero gives a certain dish-like quality to this film, where the mise-en-place is assembled, ingredients are tested, and a wonderful meal is plated at the end of it. Consider this an entree you can’t miss.
Posted in Movie Reviews