Going back into popular film directors’ early work often reveals a lot of growing pains and a lot of experimental techniques (intolerable amounts of shaky cam, stilted performances, and a lot of running) that scream “STUDENT FILM HERE!” However, 18-year-old writer/director Tristan James Jensen’s first feature film, The Unearthing, shows an uncanny amount of savvy and maturity while still retaining a youthful sensibility behind the camera, resulting in it being one of the best films I’ve seen done by someone at Jensen’s age (he was 16 when he shot this film). Combining a little bit of The Goonies, The Sixth Sense, and The Innkeepers, The Unearthing was a complete surprise to me that leaves you a lot to think about after the film rolls its last frame. 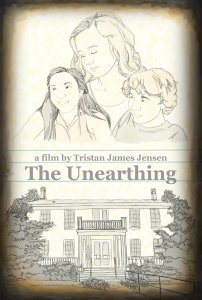 As is common, teenagers will write about teenage things: parents and the want to be away from them, being stuck in a place you don’t like, and the times with your friends as you get into mischief. Before it takes a more serious, darker turn, The Unearthing follows high schooler Autumn (Riley Yeary) as she arrives to stay for the summer with her father (Scott Novotny) in a small town in Minnesota. It’s kind of a pointless vacation – even though her father says he’s tired of missing her and wants to spend more time with her, we see that he doesn’t have any time for her whatsoever, leaving her money for food and getting home late from his job.

Neglected and lonely, Autumn soon finds adventure with two neighborhood kids her age, the intrusive and inexplicable Charlotte (Angela Masciopinto), and Parker (Kaleb Miller), who always seems to be on the outside looking in. They’re an awkward bunch at first, but Jensen throws them straight into the mystery of their lifetimes after they make contact with a ghost (Dina Novotny) inside a house-turned-museum; from this point on, the story and film’s pacing take off briskly as they attempt to get to the bottom of why the spirit continues its haunting, dealing also in turn with Autumn and Parker’s collective abandonment and loneliness.

The film takes you places you may have long forgotten, into that teenage space where nothing seems to be going right and the only people that could possibly understand or help are your friends, who are usually suffering right alongside you. And just when you think things are okay, that’s when The Unearthed takes its turn toward the horror that not only defines this film, but also underscores the struggle we all undergo as teenagers. The film’s startling third act is all about this topic, as we see the kids facing the biggest obstacles they’ve seen in their young lives. It’s uncomfortable and shocking, but then again, so is high school, isn’t it?

Jensen’s grown-up approach to the subject and the film itself reveals a practiced, polished technical style (how often do you see well-timed pans and crane-type moves in a film directed by a teenager?) and a mature decision to let the story speak for itself without laying each thread bare. He also coaxes natural performances from his leads, which includes the jaded snark that Autumn throws, the inner turmoil Parker embodies, and the ethereally optimistic and angelic shine coming off of Charlotte. Jensen doesn’t waste time with hysterics or over-the-top antics, opting instead for shades of subtlety and nuance, keeping the viewer grounded while showing you exactly what you need to see and nothing more. The Unearthing isn’t your ordinary student film, nor is it merely a stepping stone for Tristan James Jensen; it’s an announcement of his arrival and a harbinger of great things to come from this young talent.

Now available on VOD from IndieFlix. More information is here on The Unearthing’s Facebook page.