Posted by Michael Parsons on May 21, 2015 in Movie Reviews / No Comments

When weathered drifter Silas (Michael Fassbender) saves young lovesick Jay (Kodi Smit-McPhee) from a group of unsavory characters in the dangerous Colorado territories, the brutish loner decides that the kid will need a chaperone if he wants to make it much further. What the kid doesn’t realize is that Silas’ initial motives aren’t exactly altruistic; he’s a bounty hunter, and Jay is leading him right to a big payday, a Scottish immigrant named Rose (Caren Pistorius) who, in addition to being the object of Jay’s somewhat misplaced affection, is wanted for murder along with her father (Rory McCann of “Game of Thrones”). 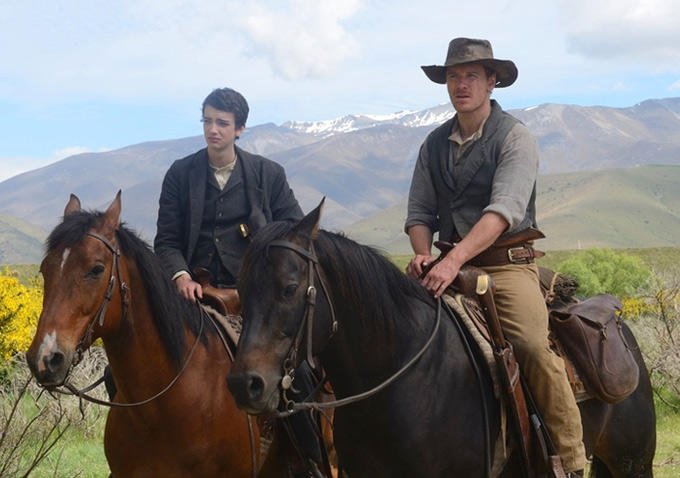 Usually, all I ask for in a Western is a decent revenge story with a high body count (this year’s “The Salvation” somewhat fulfilled that), but “Slow West”, from first-time feature writer/director John Maclean, does a sight better. The film begins as any garden variety buddy adventure might: the seasoned gunslinger bails out the scrawny bookworm and gives him a few lessons in survival on the frontier (single-file with the horses, is the first dictum), while the young intellectual, quoting Darwin and immersed in what is essentially a 19th Century edition of a Lonely Planet guide, groans on about what a Neanderthal his cigar-smoking savior is.

But a flip-flop occurs fairly early on in their dynamic, when a holdup at a remote supply store reveals that Jay is not jut brains, and Silas is not just a blunt instrument, and thereafter it’s hard to anticipate what’s going to happen between the two of them as they trek across the  breathtaking country (it was actually filmed in New Zealand) en route to Rose. Things get more complicated when the off-kilter duo encounter one of Silas’ old gang-mates, a fur-clad piece of bad news named Payne (played by Ben Mendelsohn of the Netflix series “Bloodline”), who shows up at their campsite offering absinthe and some thinly veiled threats.

“Slow West” delivers more surprises than your typical Western, but  perhaps the biggest of them is the evolution of Fassbender’s Silas from aloof outlaw into a multifaceted, surprisingly sympathetic character. Smit-McPhee, his co-star in the upcoming “X-Men:Apocalypse”, plays equal parts intelligent, delusional and strong-willed, a fitting contrast to  Fassbender, who radiates intensity even in his sleep. And a compelling performance is given by Pistorius, whose Rose begins as just an ethereal component of Jay’s daydreams but emerges as something entirely different.

The cinematography from Robbie Ryan is striking, notably a cloud-ensconced mountain vista fitfully illuminated by lightning, while Jed Kurzel, who recently sent chills up our spines with his score for “The Babadook”, lends his low-key acoustic strings to this engrossing, unusual genre entry.

And also, a high body count.

Available now on VOD, opening tomorrow at the Charles Theater in Baltimore.