The Spongebob Movie: Sponge Out of Water

Posted by Eddie Pasa on February 6, 2015 in Movie Reviews / No Comments

As the parent of two girls, I’m always wary of current children’s programming. Not only are most of these programs inferior to what I grew up watching (I mean, where are the “Knowing is half the battle” moments these days? Come on!), they’re often condescending and don’t have the best morals or examples for the kids. Even kids’ movies are getting darker and more violent – compare and contrast Disney/Pixar’s Cars and Cars 2. In the first film, the worst it got was a racing bump gone horribly wrong; in the second, there are actual depictions of torture and one not-quite-offscreen murder, which has never sat right with me. 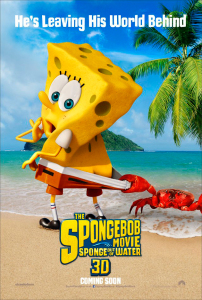 However, some childish part of me has always liked SpongeBob Squarepants (voiced by Tom Kenny), a character who certainly has his annoying traits, but also has a good conscience and a large heart. He’s always got the best intentions ahead of him, no matter how much his speech or laughter can grate on me. I guess the constant sidebars and jokes also appeal to my scatterbrainedness (if that’s a word), and I don’t really mind watching it if it’s on somewhere. Now, he has a second feature film out, The SpongeBob Movie: Sponge Out of Water, which is a heady mix of animation and live-action, all coming together to make 100% goofball fun.

What’s to expect from a SpongeBob movie? Surprisingly, there’s weirdly prescient social commentary running throughout, but it’s only there if you want to see it. Those not familiar with the show will find it easy enough to digest – I don’t think a lot of jokes went over my head, but there were obviously some jokes that were tailor-made for the show’s fans. The rest is all hijinks and yuks and some gross-out humor, surrounded by a very familiar hero’s journey-type story. 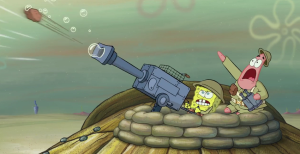 It’s no surprise that this film takes the hero’s journey route, as its screenwriters previously brought us the two Kung Fu Panda movies and the forthcoming third installment in that series. Both Kung Fu Panda and The SpongeBob Movie: Sponge Out of Water are about a flawed citizen who has to restore order to their neighborhood after some type of villainy or malfeasance, eventually falling in with a group that’s banded together to fight the evil. In SpongeBob’s case, a local competitor has stolen a secret recipe from the fast-food joint where SpongeBob works, throwing his undersea town of Bikini Bottom into Mad Max Beyond Thunderdome-like chaos, complete with leather outfits and angry mobs.

Bookended (sort of) by a live-action sequence featuring Burger-Beard the Pirate (Antonio Banderas) reading from a storybook, we are told the epic tale of how SpongeBob saved Bikini Bottom and ended the fast-food war between his boss Eugene H. Krabs (Clancy Brown), owner of the Krusty Krab, and Sheldon J. Plankton (Mr. Lawrence), owner of the Chum Bucket. Or are we? See, the book and the animated portions of movie are intertwined, and Burger-Beard’s got a trick or two up his sleeve… 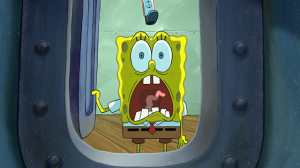 One could read into it and see The Spongebob Movie: Sponge Out of Water as a metaphor for our own materialistic and corporate dependence, and others can see it as pro-business jingoism. A food product, the Krabby Patty, is seen as the linchpin of keeping the citizens of Bikini Bottom friendly, sociable, and polite; without the Krabby Patty, they become as grumpy as a baby without his or her favorite thing, whether it’s a pacifier or a blanket. Society dissolves instantly – I’m not joking here, the blue-green bottom of the sea turns angry red-orange all at once with a big SLAM on the film’s soundtrack, and the people start rioting – as soon as the word gets out that there are no more Krabby Patties. What are the filmmakers trying to say with a plot point like that? Are they trying to point out America’s addiction to fast food, or are they trying to say that we’re helpless without the wares that Big Business sells us day in and day out?

Or are they just trying to have a little fun? With the Beyond Thunderdome references, I’m inclined to believe that. Its raucous, short-attention-span nature doesn’t leave a lot of room for plot questioning or logic; instead, the movie just invites you to go along for the ride, no matter how crazy or loud it may be. (For those of you familiar with or who live in Savannah, Georgia, the ending may be a treat for you, but it’ll also make you scratch your head at how impossibly long Broughton Street is, not to mention that it apparently ends in the ocean.) At the heart of everything is SpongeBob himself, trying to make things right for his friends and for the good folks of Bikini Bottom. While his methods and his actions seem silly and overwrought, you have to give him credit for at least trying. The Spongebob Movie: Sponge Out of Water is mercifully short, with breaks in between as Burger-Beard reads you the story from the book; those book breaks are a welcome respite from the outlandish craziness that SpongeBob perpetuates.