The notion of the “meet-cute” – two people meeting and falling in love under humorous or entertaining circumstances – can get overused sometimes. In popular romantic comedies, there’s often a pratfall of some kind, prompting one to ask the other if they’re okay, or there’s a drink spilled on someone’s jacket, or maybe they’re slapped together as college roommates because of a clerical gender mistake. When it’s boiled down to its simplest – one person meeting another by chance and pursuing from there – that’s when it immediately becomes more personal and tangible. 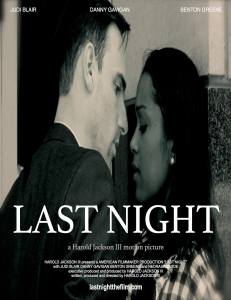 Writer/director Harold Jackson III’s first scripted feature-length film Last Night is, for all intents and purposes, a 93-minute meet-cute, following an unexpected couple – Sky (Judi Blair) is a model, Jon (Danny Gavigan) is a working stiff in a suit and tie – as they navigate the streets of Washington, D.C. on her last day and night in town. Their fumbled, awkward meeting at a coffee shop sparks a near-24-hour adventure that will test her limits and maybe, perhaps, save his soul.

There’s a wrinkle in all of this, though: Sky’s boyfriend Daniel (Benton Greene) is waiting for her in Raleigh, North Carolina. Hints of other trouble surface almost immediately: Sky seems overly hesitant and trepidatious about the move, while Daniel’s stable, well-to-do façade starts cracking due to his unspoken intuitions about Sky’s hesitation. Of course, she doesn’t really help matters by going off with Jon, a stranger she’s only just met, on what amounts to a walking tour of D.C. as they delve into their personal lives and their collective unhappiness.

Last Night often feels like two movies, each separated by location. The more grounded Daniel in Raleigh is captured mostly with locked-down photography and seen in familiar, well-executed frame compositions. Alternately, the D.C. scenes with Sky and Jon are almost always shown with handheld cameras, almost thrown-together and guerrilla-style, with very few traditional camera movements or placements. This motif in the film’s photography serves to underscore the contrast in their lifestyles – Sky doesn’t seem to want the traditional, safe life, opting instead for a little chaos and unpredictability, while Daniel is completely fine with settling down and being rooted. 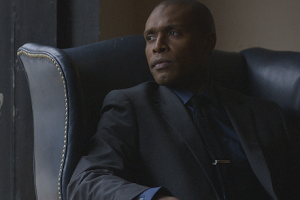 A film’s ambitions sometimes exceed the finished product, often overshooting its marks and pretending to obtain objectives it hasn’t earned. Harold Jackson III has made a film that balances those ambitions and succeeds at letting the film be what it is – an examination of three disparate characters joined in the never-ending struggle of post-college yuppiedom. Benton Greene is an unexpected treat, providing the film’s most solid performance as Daniel, a man so desperate to stay in control and with-it that he almost misses what’s just under his nose.

The film’s only grievous sin is its opening, which completely spills the beans and spoils what’s to come. With one brief montage, Jackson dispels any hint of suspense as to what will become of the characters, and that’s something I’ve never liked in a movie. However, as the best stories go, it’s not so much the destination; it’s the getting there that’s the good part. Thankfully, Last Night more than makes up for this cinematic transgression by showing us the adventures one can have in one day just walking around the city. Jackson plays it loose and coy, making Last Night an emotionally charged and engaging film about being in love and being sure of it.