Song of the Sea

What is Song of the Sea about? Is it a children’s tale of adventure and excitement rooted in Celtic folklore? Or is it a metaphor for how we deal with a mother dying in childbirth? Maybe it’s about finding one’s purpose in life. Better yet, it’s about the bond between a young boy who resents his sister for being alive while their mother isn’t. Maybe it’s just about a family trying to stay a family in the face of insurmountable odds. 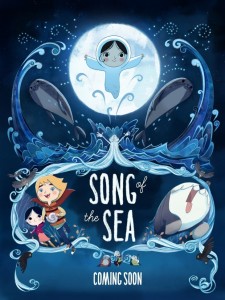 Song of the Sea is about all of these things, and yet feels like it’s not about any one of these things. The film combines all of these statements and objectives into a visually sumptuous and emotionally touching work of art, retaining a pure sense of humanity and the odd pigheadedness of childhood, both of which serve to spin this gorgeous yarn. The entirety of Song of the Sea – including the first half of the end credits, which features scenes from the movie in their rough sketch form – holds us spellbound and locked into the plight of this small family as things seems to go from bad to worse.

Young Ben (voiced by David Rawle) cannot forget the night his mother Bronagh (Lisa Hannigan) disappeared from his family’s life. Surrounded by his mother and his father Conor (Brendan Gleeson), he is told folk tales and regaled with a song that she plays on a seashell, which he commits to memory… right before he sees her double over in pain and run out the door through his sleep-closing eyes. A few years later, we learn that all that’s left of Bronagh is Saoirse (pronounced “Seer-sha,” voiced by Lucy O’Connell), the daughter she bore and left behind for Conor and Ben to care for; as a toddler, she cannot speak and is constantly treated by Ben as an annoyance, a reminder of the good life that was taken away suddenly by his mother’s disappearance. 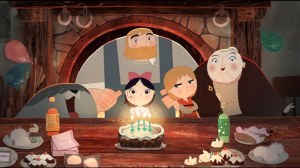 However, all is not as it seems; Saoirse is seen multiple times to heed a strange siren call that wills her toward the ocean and the seals that live there, seemingly waiting for her to join them. On her birthday, she follows fairy lights to a chest containing a gleaming white coat, which not only reveals her true nature, but that of her mother as well: they’re both selkies, seals who become human while living out of the ocean, according to folklore. Saoirse is the tie between our drudgery-filled world and a world alight with majesty and wonder. After being taken away to live with their grandmother (Fionnula Flanagan), she and Ben have to traverse that world in order to learn the whole truth about themselves, about their parents, about Saoirse’s heritage, and about the myth world itself.

No other medium could possibly hope to capture the splendor and mystery of that mythic existence; the animation seen in Song of the Sea not only captures it, but envelopes us in this alternate universe of shimmering delight and guttural darkness. It’s a simple animation, not like that found in Pixar or DreamWorks Animation films, where computer animation makes the two-dimensional lifelike and vivid. Song of the Sea is made to be experienced as a dream one has, where the possibilities are endless and the imagination is the only limit as to where your story goes. On their adventure together, Ben and Saoirse encounter all manner of creatures big and small, corporeal and wraithlike, benevolent and malevolent, and it’s a magical world to delve into and explore. 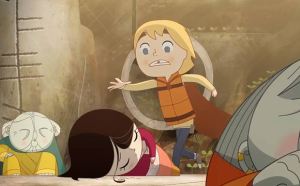 Another positive about this film is its honesty concerning the fragile heart of youth. Ben, obviously smarting from losing his mother, is your typical little boy, brash and punitive on the outside, with a reflective and injured inner self which we only see at his most vulnerable moments. And as a foil for his brutality, Saoirse can only put up with it all before her remarkable transformation, which emphasizes the innocence we all once shared – as a creature of the earth, without a label or a definition. The universality of these two characters and how they go head-to-head before each finds their own way of taking care of the other is one of the things that elevates Song of the Sea well above standard children’s fare. It speaks to so much about us as humans trying to find our own way, from being lost children to being lost adults, rudderless and helpless, with only each other to rely on for help.