White Bird in a Blizzard

Posted by Eddie Pasa on November 5, 2014 in Movie Reviews / No Comments

The late teenage years are a troubling time in any person’s life. It’s hell for the teenager, as hormones and social contracts are pulling them in all different directions, and it’s hell for the parents, who have to deal with their child becoming an adult, whether mature or not. If you throw dysfunction and seething hate into the mix, you have the recipe for an explosion just waiting for the right spark to set it off. 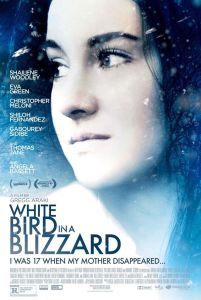 As White Bird in a Blizzard goes, this is exactly what the Connor family is experiencing. Taking place in 1988, late-stage teenager Kat (Shailene Woodley) is balancing all sorts of disparate things – a school life, her weirdly detached boyfriend Phil (Shiloh Fernandez), and her parents. Oh, boy, her parents. Homemaker mom Eve (Eva Green) looks normal on the outside but devolves into paranoid delusion in the off-hours, while milquetoast dad Brock (Christopher Meloni) just kind of stays in his rut of ho-hum ennui. And all of that changes the minute Eve disappears.

No word. No warning. No trace. Eve vanishes, leaving Brock without someone to make his dinner and leaving Kat without someone to confide in and discuss all the crazy stuff that’s happening to her. Oh, wait – that latter part didn’t happen at all. You see, Eve’s apparent obsession with how her own life used to be better before Brock ever came along have caused her to outright hate him and to be jealous of the woman Kat’s becoming. This could also be a reason why she disappeared, but we’ll never know… or will we?

White Bird in a Blizzard isn’t a “coming-of-age” story – Kat is already “of age,” making adult decisions and worrying more about having sex than getting her school work done. You could say she’s a typical person in any Gregg Araki movie (The Doom Generation, Nowhere, Totally F**ked Up, among others), that being hedonistic and shocking in a desperate way. It’s as if she’s too overeager to prove her womanhood when she’s still got miles to go before she should even consider herself an adult. Woodley acquits herself well in this role, staying believable as a teenager on the cusp of maturity – a maturity that is more acted than actually earned.

Maybe she wants to act out to be different from her passive, boring father, who is shown to neglect Eve in favor of a stack of porno mags he keeps in a locked filing cabinet. When Eve disappears, he sits with an almost dead-eyed expression, as if he cannot believe this is happening to him, but he’s too powerless to do anything about it. Meanwhile, Eve is shown to be a woman who longs for her past, dressing up in skimpy outfits to attract Phil to her. Her meddling in Kat’s development is a huge 180º from the kind of interaction we see her having with Kat at a younger age.

This film does almost nothing in its 91 minutes except keep us wondering about what happened to Eve. It’s enough to keep us rooted and watching the train wreck that is the Connors’ life as a father and daughter left without the third member of their family. Their personalities at least give us a moderate conflict to pass the time, and Eva Green’s emotionally mangled performance in the flashback scenes more than makes up for the lack of focus and narrative drive. However, when we ultimately discover Eve’s fate and the circumstances that surround it, are we really surprised? Actually, I was. Is the end worth the rest of the movie? Not really.