Posted by Michael Parsons on October 8, 2014 in Commentary, Movie Reviews / No Comments

If Woody Allen and a “Clerks” era Kevin Smith made a movie together, it might look something like the whip-smart relationship comedy “Suffering Cassandra” (showing Saturday, October 11th at the Reel Independent Film Extravaganza), a bare-bones story that centers on four young people grinding out their differences over the course of one stormy evening.

The film features terrific performances from writer/editor/director Roberto Carmona and Haely Jardas in her first feature as the contemptuous woman of the title. She’s so good that she’s either a complete natural or she’s not acting at all. And the film is so organic in quality that one might even consider its events anecdotal (If you’ve spent enough time mediating between diametrically opposed friends or family, you could feel that familiar twinge of anxiety). 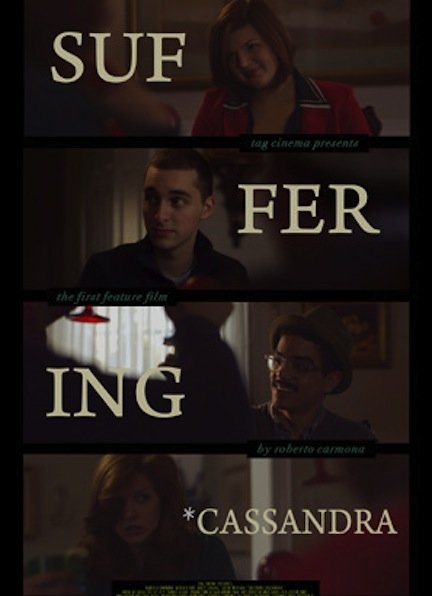 Carmona plays boyfriend Eddie, a DC editor and recent graduate who seems to piss Cassandra off as much as he feeds her intellect. Before driving to Cassandra’s college in Charlottesville, VA, the couple detour to pick up Eddie’s laptop charger from best friend Helen (Heather Rae), a perky theater major who’s just returned from an audition in NYC. Cassandra is convinced that Helen wants to sleep with Eddie, but Eddie constantly reassures her that the relationship is strictly platonic.

When Eddie learns that old college buddy Fernando (Sheen Mercado) is in town as well, a quick pop-in turns into margaritas. Margaritas turn into conversations about politics and religion. And when a freak thunderstorm puts the kibosh on Eddie and Cassandra’s travel plans, an awkward visit becomes un unbearable overnight stay.

“Suffering Cassandra” poses several conundrums that most of us have dealt with at some point in our life, but shrewdly doesn’t set out to solve them all in 80 minutes. In an increasingly combustible situation fueled by deep-seated insecurities and eventually lots of alcohol, the group’s tolerance for one another begins to wear thin, and little irritants begin to bud into some unpleasant confrontations.

Sharp dialogue is nothing if not properly timed, and Carmona and Co. deliver in spades. Where many films feel forced by trying too hard to be clever, or have actors that jump the gun with obviously over thought, pre-rehearsed responses, “Suffering Cassandra” achieves precisely the opposite with its cast: Sheen Mercado evolves from the horny, pot-smoking comic relief into a more dramatic character as some of his inner demons are revealed; Jardas is hilarious and heartbreaking as the austere, judgmental Cassandra; Carmona believably portrays an intelligent guy who’s conflicted about his future but knows deep down that he’s in love. It’s understandable, palpable even, how Helen (whose masked fragility Heather Rae captures remarkably well) is “distracted” by him; by the same token it’s easy to sympathize with Cassandra, who, though impossibly cynical, we have to imagine we’re seeing the worst of in a scenario that she was desperately hoping to avoid.

This is not “The Taming of the Shrew”, though I imagine it must have crossed Carmona’s mind at least once while writing the script. “Suffering Cassandra” is a dramatic comedy that’s geared for millennials but has just the right timbre to resonate all the way back to the baby boomers — it’s funny, smart, and most of all, relatable.