Posted by Michael Parsons on October 7, 2014 in Commentary, Movie Reviews / No Comments

I can see DC-based indie filmmaker Francis Abbey one day being tapped for something on Broadway, or at the very least the pilot for a sitcom. His rambunctious comedy “6 Nonsmokers”, which is screening on opening night (Friday, October 10th) at the Reel Independent Film Extravaganza at DC’s West End Cinema, is like a rendition of the 2001 film “Rat Race” wherein all the players and their zany energy are cooped up inside a house instead of out on a road trip.

Abbey’s film opens by establishing Dr. Henry Caldwell (Jim Murphy) as a genius in the field of conflict resolution; he’s just negotiated a truce between warring countries. Still high on the continued success of his method, the master mediator is publicly challenged by bitter rival negotiator Dr. John-Michael Roberston (Frank B. Moorman) to take on Robertson’s “white whale”: a group of six roommates who are so at odds that multiple attempts to assuage the domestic turbulence nearly cost him his career. 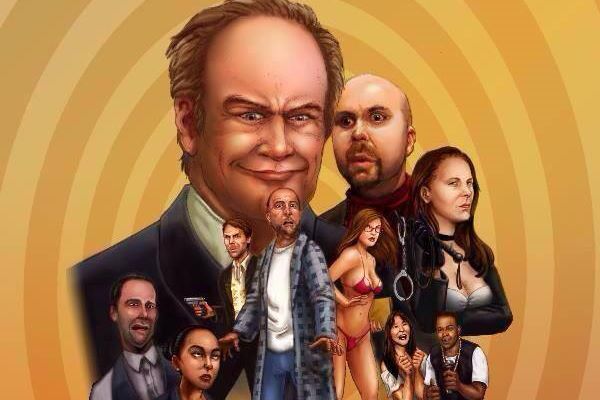 Caldwell, confident that this will be a field day compared to achieving peace in a third-world hot zone, sets out with colleague Dr. Regina Powell (Bridgetta Tomarchio) to spend 100 days at the home of what has been dubbed “Foxtrot One” — a.k.a. the six non-smokers, as that’s the only attribute they reportedly share — at the end of which he’ll announce another astounding achievement to the press.

In an “inmates running the asylum” type scenario that doesn’t exactly pass logical muster, “6 Nonsmokers” gets funnier as Powell starts to become unhinged à la Richard Dreyfuss in “What About Bob?”, and some great comedic talents emerge and eventually take over the movie. Greg Thompson (“Of Dice and Men”), who I’d describe here as a cross between an ’80s Michael Keaton and Adam Scott of “Parks and Recreation”, virtually runs the show as the scheming Coleman, who claims to be in the CIA and dresses like he’s on a Carnival Cruise ship. Coleman’s unlikely story involves his investigation of Ilbercto (there’s a hilarious animated history of Ilbercto’s fictitious homeland of Sancto Morini), who’s apparently been researching nuclear reactors on Wikipedia; Danny Gavigan is tragic as the super-skittish, vaguely European import.

Also notably funny is Demetrius Parker as the denial-stricken aspiring R & B singer Stephon, particularly when performing the only song he has in his repertoire of twenty years “Girl Your My Baby My Woman My Girl”.

A clever film that would probably work better as a stage play, “6 Nonsmokers” is plenty irreverent with its quick and often subtle wit without getting too bawdy or resorting to redundant genital jokes like any number of this year’s disposable Hollywood comedies. It has its hiccups, to be sure, but writer/director Abbey, who plays a surprisingly intense military commander at the beginning of the movie, has loaded his script (from a concept by co-star Jenna St. John) with some great dialogue (“They scored three full standard deviations above the Bloods and the Crips!” laments Tomarchio’s Powell after their initial evaluation of the group shows less than promising results). So even after a couple of the characters’ idiosyncrasies get pretty inflated and silly, the film still manages to entertain.