Ah, the good ol’ Ouija board. The fairly reliable plot device that’s made its appearance in many a horror movie for years. From the first time I saw it onscreen (either The Exorcist or Amityville 3-D) as a child to its more modern uses in film (Paranormal Activity), it’s been like that friend who looks in on you from time to time and gooses you when you think you’re alone. As a child, my oldest sister had the Parker Brothers Ouija board; its box proclaimed it to be a “mystifying oracle,” and I’ll never forget the instruction pamphlet with the graphic of a girl playing it with a wavy mist floating up from the planchette into her eyes. Ouija boards were said to be a gateway to the spirit world, resulting in many different religions making plain their stances on its use, claiming that it caused demonic possession and spiritual corruption. 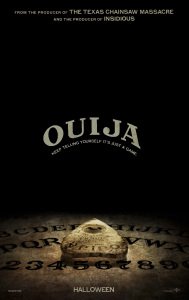 It’s the ultimate built-in spook story, and there seem to be only a handful of stories that can be generated from the use of a Ouija board. Almost all of them involve exciting some malevolent spirit from its dormant state to kill and wreak unearthly havoc, which is precisely where Stiles White’s Ouija falls. It might be said that this Ouija is almost derivative of a 2007 Filipino movie bearing the same name and almost the same story or the British film Long Time Dead, but that’s neither here nor there, as all movies using the Ouija board as their inspiration ultimately feel the same.

What is here and there with White’s Ouija is that this haunted house ride works on a genuinely superficial level, wresting big scares and tension out of a clichéd script and ho-hum acting. Fans of the horror genre will think of at least three other relatively recent films that Ouija will make them recall – most notably Drag Me To Hell, The Ring, and I Know What You Did Last Summer. Okay, that last one’s not really “recent,” what with it being 17 years old (ye gods!), but shades of it still permeate this new tale of a ring of high school friends who die off one by one at the hands of a mysterious killer.

The film’s prologue introduces young best friends Debbie and Elaine at a sleepover in Elaine’s house, with Debbie giving instructions on how to play with a Ouija board. Four rules: 1) move the planchette in a circle one time for each player, 2) speak the invocation “As friends we’ve gathered, hearts are true, spirits near, we call to you,” 3) never take your finger off the planchette, and 4) you must move the planchette to the word “Goodbye” on the board when you’re done.

Keep those rules in mind as we move to the present day, where the relationship between Debbie (Shelley Hennig) and Elaine (Olivia Cooke) as teenagers still seems very loving, but strained; Debbie seems to be freaked out about something, and she won’t tell Elaine… and she never will. That very night, Debbie mysteriously dies with no explanation. Elaine, her boyfriend Trevor (Daren Kasagoff), her sister Sarah (Ana Coto), Debbie’s boyfriend Pete (Douglas Smith), and close friend Isabelle (Bianca A. Santos) look into Debbie’s death, eventually happening upon a spooky-looking Ouija board – definitely not the one they used as children – and using it to reach out to Debbie. 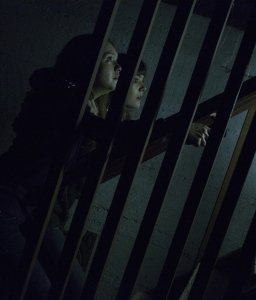 So begins a rote version of Agatha Christie’s “Ten Little Indians,” in which all the participants die because of their involvement with the Ouija board. Ouija suffers from a terrible script; logic and critical thinking hold no place in its world, with each character having multiple moments that will make you scream “Why are you doing that?!” aloud in the theater. When a character makes an obvious detour to a dark tunnel for no apparent reason and starts walking his bike instead of riding it straight through, we wonder what the filmmakers must think of their audience’s IQ levels. Likewise, when it’s obvious to everyone except the person onscreen that they should not be doing what they’re doing – be it hiding futilely in a closet or going near a pool when there’s no one around – this film earns groans instead of frights. White’s motifs of rectangles or hard edges in every shot are a little heavy-handed, driving the Ouija board metaphor home with a sledgehammer to the eyes. It’s almost a companion piece to Gore Verbinski’s The Ring, I think, only substituting rhomboid or trapezoidal images for The Ring’s circles.

However, like Sheriff Leigh Brackett so famously said in some little 1978 horror movie, “It’s Halloween; everyone’s entitled to one good scare.” This is where White’s Ouija earns its stars. If you get past the initial stupidity that starts each scare sequence, you’ll notice that White mellows out his movements and makes like a shark in the water; you know it’s there, and you see it coming, but you don’t quite know when it’s going to move and strike, much less how it’s going to strike. He allows us to sit for a little while and almost oversells us on the scare we know is just around the corner, but that extra moment or two before the jump is worth it. Ouija seems to be built around its scares, with the script merely filling in what little plot exists.The actors rarely rise above the script’s by-the-book standard; some of them seem to walk through the film or overact, as if everyone knows that it’s just middling until the frights come. Like other PG-13 horror movies recently, its scares are serviceable, but you have to endure a lot of pain to get to them.