“When you grow old, your heart dies.”
— Allison Reynolds, The Breakfast Club

There’s a huge reason why this quote is on my mind concerning The LEGO Movie. I think it’s because it captures the child imagination so well that there’s no excuse but to fall in love with the film as an adult. Even so much as saying the word “LEGO” brings back memories of summer days and building being limited by only the imagination and the number of LEGO bricks you had. And now, Phil Lord and Chris Miller (the directors of the 21 Jump Street reboot and its soon-to-be-released sequel) have made a loving filmic homage to those days when it was possible to make anything out of nothing. 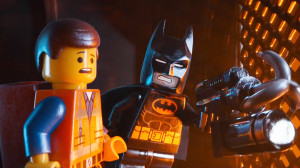 LEGO toys have advanced since I was a kid; in my day, there were a few Star Wars LEGO sets, a few generic space kits, and a whole lot of LEGO bricks my parents bought for my sisters and me, stuffed away in a huge popcorn tin that was full to bursting. Now, it seems that you can’t buy anything except set pieces, ranging from generic buildings to brand name Disney and LucasFilm products. (Believe me, as the father of two, I’ve spent a fair amount of time in the LEGO section of our toy store. It’s a whole new world out there.) With these sets come the minifigures, which I mostly remember having a lot of fun switching their body parts around.

It’s in the world of these LEGO sets that a minifigure construction worker Emmet (Chris Pratt) lives his nondescript existence, trying too hard to be a part of the crowd and being entirely unmemorable to even his co-workers. There’s nothing special about his life, but that’s all about to change due to Emmet’s discovery of the “Piece of Resistance” – a red piece of plastic that soon finds itself attached to Emmet’s back. This suddenly thrusts him headfirst into a revolution involving the Master Builders, a team of skilled minifigures capable of throwing together any kind of creation at a moment’s notice. These resistance fighters include gorgeous-but-deadly Wyldstyle (Elizabeth Banks), a wizard named Vitruvius (Morgan Freeman), and – why not – Batman (Will Arnett).

On the opposite side of the revolution is Lord Business (Will Ferrell), a minifigure bent on using the “Kragle” against the LEGO universe and its inhabitants. (And if you’ve seen 1979’s Star Trek: The Motion Picture, you’ll have fun seeing what the Kragle really is. Don’t worry, you won’t have to wait until the end of the movie.) The aforementioned Piece of Resistance that’s on Emmet’s back has a large part in stopping the Kragle, and the Master Builders have to infiltrate Lord Business’ fortress to implement its use.

It sounds like any ordinary science-fiction battle film, from Star Wars to The Matrix. However, Lord and Miller have taken it straight out of the ordinary by setting it largely in a world made of LEGO sets and bricks, where anything (and everything) can happen as soon as it’s imagined. The film moves at such an hyperactive pace with as much energy to match. It’s honestly as if Lord and Miller managed to catch every bit of magic and instant lunacy of a child’s playtime on the written page and made it explode into colorful motion on film.

However, the third act reveal will punch you square in the guts. While everything that has gone before this reveal is certainly entertaining, it’s made all the more meaningful by throwing all the characters’ motivations into sharp relief. And that’s why the quote which opens this review is spinning in my head as I write this. Without going into too much detail, The LEGO Movie makes a bold statement about those you love and what’s more important in your life. Ultimately, The LEGO Movie comes off more as a valiant call to arms concerning childhood and the unbound human imagination which bears required (and stands up to) multiple viewings. Believe me – I’ve already seen it twice, and it’s even better the second time around.