Paranormal Activity: The Marked Ones

Posted by Eddie Pasa on January 3, 2014 in Movie Reviews / No Comments

Much like the Saw franchise before its demise, it seems we can’t go a year without seeing a new Paranormal Activity movie. Shot on the cheap with not much in the way of special effects and sound design, the four previous movies in this series have been Paramount Pictures’ annual reason to go to the bank with huge deposits in hand. Even though the quality of the films has subsided with each successive installment (except for PA3, which I’ll still watch every now and again), they all guarantee scares that audiences seem to fervently relish. Now, they’re at it again, but not with a direct sequel; Paranormal Activity: The Marked Ones is a parallel story in the same universe, standing proudly on its own and delivering not just the scares, but a fairly good tale as well.

The film relies just enough on the mythology set up by its predecessors, borrowing ideas (and a character or two) from each film to get things going. While this reliance is put in place to seat this story in the realm of the series, it’s not an overreach. There are no repetitive Blair Witch-type “remember what that guy said to us?” or “remember that thing that happened to that girl in San Diego?” dialogue moments, nor are there any mentions of Katie Featherston and Micah Sloat. And I’m not lying when I say that last one – except for one fleeting, unbeknownst-to-them reference, they are not mentioned at all by the main characters. Instead, Paranormal Activity: The Marked Ones seeks to further the backstory of the demonic cult set up in the third film, delving into their practices and their possible motivations. 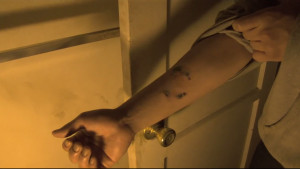 Caught up in this exposition is 18-year-old Jesse (Andrew Jacobs), a recent high school graduate with a proud family standing behind him. Having received a video camera for his graduation, he goes about documenting everything – his grad party, his best friend Hector (Jorge Diaz) sign-spinning, and the weird occurrences of his “bruja” (Spanish for “witch”) neighbor Anna (Gloria Sandoval). But when Anna winds up in a body bag with her suspected murderer Oscar (Carlos Pratts) on the run, both Jesse and Hector decide to invoke their inner Hardy Boys and investigate on their own.

Crossing police tape and entering Anna’s apartment – where the windows are covered with newspapers and windowshades – they discover the darker side of their neighbor and why she was killed. And in the morning after visiting her apartment, Jesse wakes up with a strange-looking wound on his arm that looks suspiciously like a bite mark… Now, if you’ve seen the previous films, you know that once someone’s got a bite mark on them, you’re automatically saying to yourself in today’s patois, “they be f**ked.” Jesse’s sister Marisol (Gabrielle Walsh), their grandmother Irma (Renee Victor), and Hector risk their lives to save Jesse before it’s too late, soon finding themselves caught in a game that can only end one way: certain death.

Paranormal Activity: The Marked Ones is easily the most enjoyable Paranormal Activity movie since the original. It not only brings a new side to the mythos, it also starts making sense of what’s happened before. Writer/director Christopher B. Landon (who cut his teeth writing the sequels of the series) has opened a world tangential to the story surrounding Katie Featherston and her pet demon Toby, marking the first time the series has attempted to grow beyond its borders. The possibilities are made endless with this franchise now, as this film shows that what happened to Katie can happen to damn near anyone. 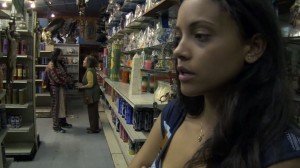 The aesthetics haven’t changed, even though this is a parallel story. We’re still dealing in found footage here, folks, which means the camera’s gonna shake nauseatingly and the performances are going to be as forced-naturalistic as possible. Jacobs holds the film down well as the focal point of the demon’s fixation; his transition from happy-go-lucky teen to a man possessed and pulling stuff out of his eyeballs is believable, never throwing us into doubt that he’s playing it as natural as it gets. On the other hand, Diaz’s borderline buffoonish Hector is a good comic foil, almost akin to Cloverfield‘s “Hud” character. There aren’t really any characters whose actions are going to drive you insane; everyone has their role and place in the grand scheme, and it all fits rather well. And when the denouement comes along, you’ll find yourself with your hand covering your mouth in abject surprise.

If you had to think about Paranormal Activity: The Marked Ones in cinematic language, I’d say that if you threw Chronicle, Final Destination 5, and the aforementioned Cloverfield into a blender, you’d come up with the general idea. Unoriginality aside, what’s great about this film is that it doesn’t rely on the trickery and the gimmicks that made the previous four movies infamous. Often, I think of the Paranormal Activity series as a feature-length “Photo Hunt” game. You know, that game you play in bars on touchscreens? The one that makes you find the differences between two similar pictures, one having been altered subtly to keep you guessing? Yeah. Gone are the “look closely at the screen and figure out what’s wrong” moments, replaced by a found footage movie that powers ahead like a locomotive and doesn’t waste time with hanging around. And when the camera does stand still, things happen that make you emit sounds of surprise from your mouth. Maybe it’ll be a gasp. Or it might just be a scream.