Posted by Michael Parsons on October 15, 2013 in Movie Reviews / No Comments

Before you grimace at the thought of another found-footage horror flick, know this: Bobcat Goldthwait, the actor/comedian who cut his directing chops on 1991’s hilariously twisted “Shakes the Clown” and condemned our society’s obsession with reality television in 2011’s ultra-violent “God Bless America”, fully appreciates the fact that the super-efficient style of filmmaking made popular by 1999’s “Blair Witch Project” has been all but played out. With his first horror picture, “Willow Creek”, it seems that Goldthwait simply intends to make the sub-genre fun again, not revolutionize it. 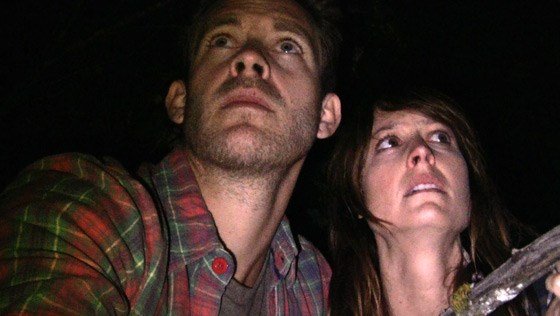 The film, which opened the 2013 Spooky Movie Film Festival at the AFI Silver, follows fictional couple Jim and Kelly (played convincingly by Bryce Johnson and Alexie Gilmore) as they venture to the titular California region in search of Sasquatch, documenting various legend-related sites along the way. Such landmarks serve to acquaint us with the actual town (there really is a diner where you can get a Bigfoot burger) and some of its denizens (the proprietor of the Bigfoot Inn who doesn’t believe in the lore is particularly memorable) who compliment the film’s naturalistic tone.

Though the basic framework of the story is almost stock for such fare, the fleshed-out characters and semi-improvised dialogue are thoroughly interesting on their own, making the movie more about them than cheap jolts. Jim, a true believer in the Bigfoot legend, is excited to lay eyes upon the site where the famous Patterson–Gimlin footage was taken in 1967 (we’ve all seen the photo), hopeful that he’ll catch some creature footage of his own. A skeptic at best, Kelly is just along to spend time with Jim on his birthday, humoring him though not without the occasional ribbing about the topic.

As the couple get closer to their destination, the tension mounts and we find them in peril, a situation in which Goldthwait initially leaves the camera completely still for an admittedly uncomfortable 19 minutes. Some intended scares might be thwarted by our desensitization to found footage gimmicks – crackling branches outside of a tent, the expressions of sheer terror on the characters’ faces, etc. – but Goldthwait, who also wrote the film, doesn’t put all his stock in the typical tricks, nor does he leave everything entirely to the imagination. With that in mind, it might not be quite enough to re-engage those who’ve given up on found-footage, having endured too many sub-par efforts of its type over the past decade (regardless of it being well above average).

Before it gets creepy, “Willow Creek” is a surprisingly funny and charming observation of the relationship between Jim and Kelly, broaching a few sensitive topics that are sometimes more frightening than the film’s mysterious wildlife. Though it’s never quite absent from our minds that something terrible is going to happen, it’s perfectly enjoyable as an experimental character study – an unusual quality for this type of film to have – which makes it all the more effective when those characters side-step out of their quirky romantic drama into a nightmare.

Click here to read our interview with Bobcat Goldthwait