Posted by Eddie Pasa on October 11, 2013 in Movie Reviews / No Comments

Here’s a bit of history.
In 2007, acclaimed cult directors Quentin Tarantino (Pulp Fiction) and Robert Rodriguez (El Mariachi) teamed up and released a double feature called Grindhouse, which boasted one movie by each director and several fake trailers for nonexistent movies from Rodriguez, Eli Roth (Hostel), Edgar Wright (Shaun of the Dead), and Rob Zombie (The Devil’s Rejects). Some dismissed it a vanity project; however, it was mostly praised for being a throwback to ‘70s trash cinema and for emulating the “grindhouse movie” experience so well. Grindhouse was presented as a scratched-up, damaged print, with each film missing an entire reel of footage (as was wont to happen, according to Tarantino), leaving the audience to mentally fill in the gaps for themselves.

Grindhouse’s first fake trailer was for a “film” called Machete, starring Danny Trejo as the title character – a Mexican Federale-turned-assassin for hire who’s been tasked with eliminating a Texas senator. This trailer was almost a complete film in itself, with a lot of action, a somewhat gripping story, and a lot of sleazy, dark humor, leaving fans wondering if it would ever be made into a full-length film. In 2010, they got their wish: Machete sliced its way onto movie screens nationwide, garnering critical and fan acclaim while making a decent splash at the box office, tripling its budget in returns. As the credits for Machete rolled, an announcer’s guttural voice came over the theater speakers to promise the sequels Machete Kills and Machete Kills Again. 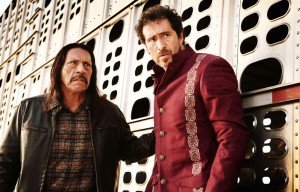 When I went to Comic-Con in 2011, one of the first big panels I attended featured Rodriguez, who wasted no time in giving the salivating fans the news for which they’d been waiting so eagerly: Machete Kills would be filming in the near future, jokingly adding that Machete Kills Again would be set in space. Two years later, Machete Kills has landed in movie theaters everywhere, and it’s just as much of a rollicking treat as its predecessor. Starting off with a trailer just like Grindhouse did, Machete Kills furthers the story of Machete Cortez, working for the Immigration and Customs Enforcement agency alongside Agent Sartana Rivera (Jessica Alba) to bust an illegal gun and missile exchange operated by none other than the United States Army.

Disastrously interrupted by a drug cartel known as Los Cuerpos, Machete soon finds himself hired by the President himself (Charlie Sheen, credited using his birth name, Carlos Estevez) to find out where that missile went and who’s got it. Back in Mexican territory, Machete and his CIA handler known as Miss San Antonio (Amber Heard) endeavor to ferret out the psychotic “Madman” Mendez (Demián Bichir) before he fires the missile at the White House. However, there’s a deeper conspiracy afoot, and Machete’s only nicked the surface of it. By the final third of the film, we know exactly who’s got his hand hovering over the button and why he’s dead-set on turning the world into a nuclear ashtray. 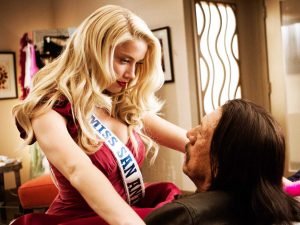 It’s no mean feat or any stretch of the imagination to see where Machete Kills is going, but it’s the getting there that’s the fun part. Robert Rodriguez is back behind the camera again, and that should be enough of a reason for you to venture to your local theater to catch this movie. Testosterone-laden, hyper-violent, gorily messy, and daftly loony, Machete Kills doesn’t want to do anything more than be an incredulously amusing diversion; in that, it succeeds handily. Rodriguez keeps things bouncing along with all the gusto that made his feature debut El Mariachi so much fun – you couldn’t wait to see what kind of tricks he had up his sleeve or what he was going to throw at you next. With Machete Kills, he throws everything and the kitchen sink at us: a bitter revenge story, shady government machinations, insanely demented action sequences, and the requisite dose of sleaze to round everything out. Bichir’s Mendez is one of the best characters in this movie; his alternations between “Madman Mendez” and the rational, sane Mendez provide the humorous counterpoint to Trejo’s stolid, the-less-said-the-better Machete. From his smallish role in Michael Mann’s Heat to Machete Kills, Trejo is always fun to watch, and I’m thankful that these movies have given him room to be the main attraction in a circus full of freaks and weirdos. He manages to hold down the movie with his searing gaze and his tight-lipped and clipped bon mots, giving a line like “Machete don’t Tweet” his own brand of smirking dignity.

On the villainy side, an out-of-nowhere Mel Gibson turns in a delightfully deft performance as Luther Voz, an arms manufacturer with a serious sci-fi bent. It’s been quite a while since we’ve seen this side of him; I think 1998’s Lethal Weapon 4 and 1999’s Payback were the last times that we saw Gibson have any fun. Here, he relishes every minute he spends onscreen as Voz, and it’s a welcome sight. However, there’s one character whose motives are not made immediately plain, if at all, and that’s The Chameleon, or El Camaleón. Played by four actors throughout the movie (I’ll leave these actors for you to discover) The Chameleon goes from scene to scene with his gold-plated, silenced Walther PPK, shooting anyone who’s unlucky enough to lay his or her eyes on him. Is he a bounty hunter? Or has he been sent by the US or Mexican government to eliminate Machete once and for all? The role is not explained enough to be justified, and I spent a lot of the movie wondering exactly what The Chameleon was up to. Don’t get me wrong, it’s rather fun to see these four playing around and being this mysterious character, but in the end, it just didn’t make any sense. Then again, if you look at what I’ve said so far, I’ve said the word “fun” a whole hell of a lot, and that’s what Machete Kills is here to give you, shadily superfluous roles be damned.

There’s just something great about a novelty that gets taken just seriously enough for it to become a franchise. But it’s treated with enough irreverence so that it never loses its sense of fun and goofiness, and that’s where the Machete pantheon fits – in that perfect space where the ridiculous is championed and self-deprecation wins the day. How do you not love a movie that’s aiming to be a glorious B-movie? Machete and Machete Kills are the types of films that know exactly what they want to be; they’re not out to win awards or to make some grand statement. They’re produced for the sheer fun of filmmaking and enjoyment, very much akin to the crazy, hypermad movies you may have done with your friends in your childhood or in your high school film club. Except, of course, on a bigger budget and with the KNB Effects Group in charge of all the gore and makeup effects. It’s that kind of lunacy that makes Machete Kills a fun Saturday afternoon at the movies.

(Special thanks to Alvin Ecarma – without him, I wouldn’t be having this much fun at a movie like this.)