Posted by Eddie Pasa on October 25, 2013 in Movie Reviews / No Comments

If you’ve been living under a rock or just aren’t old enough, you may never have heard of Johnny Knoxville or his MTV prank/stunt show “Jackass.” Chock-full of puerile, dangerous, juvenile, and often hilarious content, “Jackass” may have been lowest-common-denominator television to some, but inspired lunacy to other viewers. Myself? I saw it as a little bit of the decline of Western civilization – here was a show that was predicated upon people videotaping themselves as they purposefully hurt and injured themselves (and others) for the sake of being on television. Only after the feature-length Jackass: The Movie in 2002 did I understand what they were trying to do – they’d grown up on the same kind of cartoons that I did, and they were largely emulating the Coyote and his catastrophic attempts at catching the Road Runner, in addition to many other things that I’d only seen on Saturday morning television.

Knoxville and his band of “professional” stuntmen (according to the disclaimers before and after every show and movie) have been making merry havoc for the last 13 years, growing ever more outrageous with their stuntwork and their pranks. At the heart of everything, it’s director Jeff Tremaine and the “Jackass” crew trying to push their own envelopes and make themselves laugh. There’s never been a standard narrative to anything they’ve attempted so far; both the show and the movies are just compilations of stunts, pranks, and comedy bits. With Tremaine’s fourth theatrically-released Jackass movie, Jackass Presents: Bad Grandpa, they’re using a frame story as a springboard for more pranks and stunts in what could be considered the first “real” Jackass movie, instead of merely being a feature-length reality TV show. 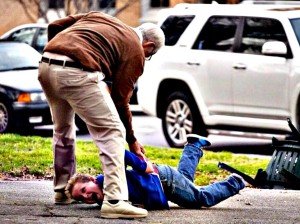 With the help of old-age makeup, Knoxville reprises his “dirty old man” role from the first three Jackass movies, Irving Zisman. Here’s what we know about Zisman so far – he’s a lecherous kleptomaniac with, shall we say, very low-hanging fruit. These qualities were *ahem* exposed to us in the earlier movies, all resulting in differing levels of hilarity. Bad Grandpa provides a look into Zisman’s life as he deals with the death of his wife and the upcoming imprisonment of his daughter, the latter of which leaves Zisman in charge of his young grandson Billy (Jackson Nicoll). Zisman, recently freed from his wife, is only concerned with getting laid, thus needing Billy like a drowning man needs water; he almost instantly makes arrangements to take him from Lincoln, NE to Raleigh, NC so Billy can live with his ne’er-do-well dad.

Being a movie based on a reality show famous for its outrageous hijinks and for offending content, it’s got a surprising heart, as we see Zisman and Billy get to know each other as they make their way across the United States. However, a full-length movie about a man whose scenes from the earlier Jackass movies I skip through may not have been what this character needed. Granted, we get to see Zisman in all his tomcatting, ball-swinging glory, but there’s only so much of Knoxville’s blessedly dumb ignorance that I can stand before wanting to watch something else. In the first movies, Zisman was only the main character in one or two scenes each. Here, we have a movie where he’s in almost every scene, making people feel uncomfortable and going out of his way to annoy and enrage; sometimes, you’ll find yourself laughing. Other times, not.

Tremaine and Knoxville’s different attempt at storytelling tends to throw you into a weird space, as they constantly alternate from the Zisman/Billy relationship to the mindless fun that makes Jackass famous. And let’s face it – that’s the reason you want to see this movie. Tremaine’s cameras catch undiluted reactions to Zisman’s shenanigans, ranging from utter disbelief to outright rage, and in that, Bad Grandpa could potentially be seen as a testament to how we act towards our elderly. However, isn’t it more fun just to watch the train wreck sometimes? In the case of Bad Grandpa, it is. Civilians with no idea that they’re being pranked by Knoxville, Nicoll and the “Jackass” crew are captured at their angriest, most uncomfortable, shocked, and confused moments, and we can’t help but giggle. There are some choice reactions to be found here, especially those concerning a funeral and a strip club. Best of all, for me, was the footage shown under the closing credits, when people are told that they’ve been participating in the filming of a Johnny Knoxville movie. Not only does it let them off the hook, it lets the audience off the hook as well, in an oddly cathartic way, wrapping everything up as nicely as you’d expect from the “Jackass” boys.