It’s kind of odd to look at the lives of Herb and Dorothy Vogel with a modern eye. No children, but plenty of cats, fish, and turtles in a cramped one-bedroom apartment that houses one of the largest modern art collections in the world. The very first impression one gets when they see filmmaker Megumi Sasaki’s new documentary Herb & Dorothy 50×50 is “Were these people on that ‘Hoarders’ show on A&E?” But when you dig deeper, as Sasaki does on her second go-round with the Vogels (her first documentary about the Vogels, Herb and Dorothy, was released in 2008) , you realize that it’s not a compulsion, an addiction, or any kind of disorder; rather, it’s an honest love for art that has driven the Vogels to amass this collection over the years, and it’s also their own way of supporting artists and inspiring them to keep creating.

Sasaki’s camera follows the Vogels as they find new homes for their collection of 4,000-plus works of art, ranging from full paintings to sculptures to watercolors on college-rule notebook paper. The Fifty Works For Fifty States program, through the National Gallery of Art, distributed 2,500 of these pieces to every state of our country, and we get to see the reactions of the curators and museum directors as the Vogels transfer these valuable items to the world outside their apartment. Having previously been housed in their closets, their bedroom, underneath the bed (it is said that they kept amassing so much that their bed slowly rose off of the floor), and on their walls, this art is now being displayed with the utmost respect and care given, with input from the Vogels regarding positioning and lighting. 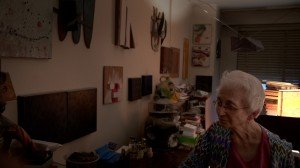 But it’s not so much about the art as it is the passion that the Vogels have for art itself. Beginning their collection before their marriage in 1962 with a piece by Giuseppe Napoli and buying a ceramic by Pablo Picasso as an engagement gift, they dedicated their life together to collecting works of art they could appreciate and take home easily. Married for around 50 years, Herb and Dorothy made this collection their life’s work, using Dorothy’s income for living expenses and Herb’s income for art purchases. Spending frugally and eschewing restaurants and other frivolities made this easier; however, by the time the Fifty Works program gets started, their apartment looks cramped and uncomfortable. Sasaki doesn’t spare us from this sight, as we see two elderly people navigating their way through tight spaces in order to go their bed or to the kitchen. It’s a little awkward to watch, but there’s comfort in the fact that they’re doing what they love and they’re not hurting themselves or anyone else.

What’s really at stake here is the impact that this art will have on the lives of people near and far. Some write things off as being barely art; one person says that some of it is like doing something simple, slapping a frame on it, and calling it “art.” Another says that some of it doesn’t qualify as art. However, someone says that most of it is for inspiration – if you can look at the painting and think, “Oh, I can do that,” then it’s done its job. Herb and Dorothy have shared their collection with the country; now, they’re sharing their lives with you for a second time, and you don’t have to be an art aficionado to appreciate it. All you have to do is look, listen, and learn, and you’ll find yourself thankful that you did.