Stepping out of my screening of Gravity, I instantly turned to the night sky and wondered about what goes on up there. We all hear about space junk and debris, with news reports of satellites and other objects falling from their orbits and entering Earth’s atmosphere. Gravity takes us out to the black, star-dotted reaches of space, centering us on a space mission gone horribly awry. Is it ultimately a piece of social commentary on what we’re doing to our own planet below? Or is it a statement on the power of the human condition when faced with the choice of living or dying? Maybe it’s just one of the most wonderfully-made disaster films of all time. Gravity is all of that and so much more. Director (and co-writer) Alfonso Cuarón blasts us with unforgettable imagery, disorienting sound, raw human emotion, and a story that you have to see to believe, coming away with one of the most important films we could ever hope to see.

Sandra Bullock has stepped out of the shadow of her “sweetheart” films and given the best performance of her career as Dr. Ryan Stone, a biomedical researcher who’s been given the opportunity to work in space alongside Matt Kowalski (George Clooney), an astronaut on his final mission. Cuarón immediately puts us on our guard as he opens his picture in the darkness of space, as Stone and Kowalski endeavor to fix a small problem plaguing her project. Right away, we are treated to seemingly unbroken takes that bury us in this film’s milieu, to the point where we feel as if we’re floating right next to our spacewalkers. However, that tranquility is about to be shattered by a report of space debris hurtling through Earth’s orbit at dangerously high speeds, which starts a chain reaction of destruction and mayhem, eradicating a lot of hope for Stone and Kowalski’s safe return to Earth. 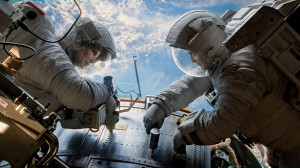 From there, the suspense and the thrills that fill Gravity start bouncing us around. It’s almost the antithesis of a Michael Bay film, the kind that relies on quick edits and large, deafening explosions to blow the audience into the next room. Cuarón takes the opposite tack, alternating between jarring silence and self-comforting chatter with minimal incendiary conflagrations as Stone and Kowalski try to survive their ordeal. Make no mistake – this is an ordeal that only a privileged few could ever hope to experience, but Cuarón manages to put us directly in their shoes, making us feel the terror of being stuck in a situation in which there is little to no control.

That, to me, is what makes Gravity one of the best films of the year – it dares to exhaust every “what if?” we’ve ever imagined about being lucky enough to actually go into space. In that sense, Gravity is a little bit of a horror film, where the killer is not a hockey-masked slasher, but rather the simplest of all killers: a lack of oxygen. At every turn, Stone has to keep fighting this specter just like a Final Girl would do in any horror movie, trying to put as much distance between death and her own survival with every breath she takes. Bullock’s tour-de-force performance makes us feel and live every bit of what she’s going through, whether it’s bug-eyed panic while spinning helplessly through the void or defeated, drained resignation when faced with the weight of her circumstances.

Alfonso Cuarón has delivered a masterpiece of a film, indulging us with long, involving camera shots which lend the film so much credibility; you’ll almost believe that you’re right in the middle of everything. His inspired use of the 3D format works entirely to his advantage, as he wants you to feel and experience every harrowing spin and collision inflicted on Stone and Kowalski. If you don’t like 3D, too bad – this is really the only way to truly experience this film. Rarely does a film completely immerse you in its surroundings, merciless in its sensory captivation, with its stunning power holding you in thrall. Gravity does this and so much more in its brief 91-minute running time; it envelops the viewer and doesn’t let its grasp slip for one second.