(In preparation for Friday’s release of Insidious: Chapter 2, I caught up on the first film in the series… here are my thoughts.)

Director James Wan sure can make deeply psychologically disturbing movies – he’s responsible for the first film in the Saw series, which (people forget) was a true exercise in terror, not gore, and the underrated Dead Silence, which featured some of the most memorably creepy imagery put to film. With Insidious, he takes his talents out of the gory R-rated milieu and pushes the envelope as to how scary a PG-13 movie can be – there’s absolutely no gore at all in this film, but in its place is a lot of tension and genuine fright as he takes us on an almost Poltergeist-like trip through the supernatural.

Truly, Insidious can be seen as reworking and update of Tobe Hooper’s Poltergeist, as it involves a family and a young child with extraordinary capabilities being targeted by otherworldly forces. However, Wan approaches his tale with a matter-of-fact style, forgoing any sense of the saccharine and giving us a bleak glimpse into the Lambert family’s sudden predicament. Opening with some unsettling black-and-white shots (many of which are explained later in the film), Insidious casts its gaze on Josh (Patrick Wilson) and Renai (pronounced as “Renée”, played by Rose Byrne) Lambert as they start their life in their new home with their two sons, Dalton (Ty Simpkins) and Foster (Andrew Astor), and their infant daughter.

Almost immediately after they move in, Dalton falls into an inexplicable coma the morning after he goes up to check out their new attic and falls off a ladder. It is revealed that no brain trauma or physical harm has been inflicted upon him, and if that wasn’t weird enough, Renai starts seeing strange people in her house that disappear when approached. The Lamberts may be the first movie family to do what no other spook-story movie family has done before: move when the weird things start happening; it soon proves fruitless, as the hauntings pick up right where they left off in their old house. 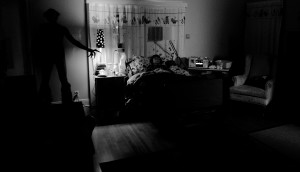 The haunting of the Lambert family is quite effective, as Wan uses ghoulish makeup, shadows, light, and sound to effectively cast dread over his entire movie. All of the colors have been drained out of the entire movie, leaving Insidious feeling void of any kind of life or vibrancy; when normal color saturation does happen, it’s usually to give the viewer some kind of hope, but it’s quickly taken away by the dark forces circling the Lambert family like vultures above a fresh kill. The first two acts of Insidious revel in this apprehension, with lots of jump scares and frights being thrown at you on the screen and through the speakers, resulting in a movie that’ll make you actually watch it through half-covered eyes, with your fingers shielding you from the terror for most of the time.

That said, it’s the third act that unravels everything. After layer upon layer of creepiness and tension is heaped upon us and a terrifying séance shows us the kind of spirits we’re dealing with, writer Leigh Whannell (also appearing in the movie as a character named Specs) seems to have tried a little too hard to give us something that we’ve never seen before, ultimately ending up writing a rather boring third act that never reaches the intensity of the first two. It takes us on unnecessary journeys into a spiritual no-man’s-land and frills about for a little while before absolutely nailing the landing; the movie’s closing scenes definitely make up for the nonsense you had to sit through to get there.

Wan uses practical effects, scary sound design, and something I call “framebaiting” (that film technique that familiarizes the viewer with an image by showing it multiple times, and the filmmakers insert something scary into the last time you see the image) in order to wrest you out of your seat with fear and terror. If you watch this at home late at night, don’t be surprised to find yourself turning on all the lights on your way up to bed. Even though the last third of the movie spins its wheels a bit and serves little more than to set up the ending, Insidious is a scary, intense movie that will leave you unsettled and rattled, with visions of “the man with fire on his face” haunting your sleep and your thoughts.