Posted by Eddie Pasa on August 2, 2013 in Movie Reviews / No Comments

Usually, studios leave August open for the movies that didn’t quite fit the rubric of the blockbuster summer movie, the easy moneymaker, the franchise film, or – as has proven to be popular with moviegoing audiences of late – the reboot. It’s here they dump off projects they didn’t want competing against high-profile releases or couldn’t quite market correctly. This weekend, 2 Guns, starring Denzel Washington and Mark Wahlberg, is being dropped almost quietly into theaters without much fanfare or hype, and it winds up being the sneaky, hidden gem of a movie no one was expecting.

Throughout the summer, trailers for 2 Guns popped up here and there, showing us how two bank robbers – Bobby “Beans” Trench (Washington) and Marcus “Stig” Stigman (Wahlberg) – do their thing at “a bank across from a diner that has the best doughnuts in three counties,” only to later find out that they’re both undercover. Bobby’s a DEA agent, Stig’s working a special operation for the United States Navy, and both of them have just ripped off a bank for $43 million and change. Expecting to take only $3 million from drug kingpin Papi Greco (Edward James Olmos), the question soon crosses their lips: Whose money is it? Betrayals between themselves, their respective agencies, and the cartel itself start piling up, and they soon find that the only people they can trust are each other. But when Earl (Bill Paxton) shows up, there’s another fine twist: he’s CIA, and the money belongs to them. 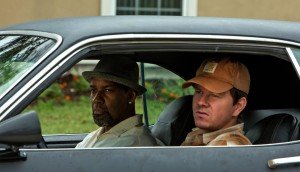 What makes 2 Guns pop is its pacing, superb crackling dialogue, and the charisma of the two leads. Washington and Wahlberg make a fairly interesting and awesome duo, with their enjoyable screen presence and witty banter buoying the proceedings. Each one of them is likable enough on their own; director Baltasar Kormákur (who helmed another Wahlberg actioner, Contraband) dared to put these two together and let the fireworks speak for themselves. The result is a totally enjoyable, fun action film, sacrificing nothing for a lower, family-friendly MPAA rating. Screenwriter Blake Masters, working from the Boom! Studios graphic novel by Steven Grant, should be credited as well for penning a swift-moving, often hilarious buddy-cop movie that doesn’t always travel the safe, familiar route. Instead, as the body count rises and situations start blowing progressively more and more out of proportion, Masters keeps it light where it needs to be and heavy enough for us to truly appreciate the gravity of Bobby and Stig’s predicament.

Not enough can be said about the fun that Washington and Wahlberg provide. Originally, this movie was cast with Vince Vaughn as Bobby and Owen Wilson as Stig; I’m very glad that didn’t happen, as too much would have been made of the comedy and the action would have more than likely been nonsensical. Washington and Wahlberg bring a decent weight to their roles, and it doesn’t hurt that we’ve seen them in films like this before (Training Day, The Big Hit). Their rapport and their ability to juggle action sequences with punchy dialogue in between make 2 Guns more than a recommended watch; I definitely wouldn’t mind going to the theater to see it again.

P.S. If you’re a fan of The Spanish Prisoner like I am, you’ll see something in the middle of the movie that you may recognize…