Posted by Michael Parsons on December 27, 2012 in Movie Reviews / 2 Comments

(This review was originally published on December 27, 2012 at Reel Film News)

The expression ‘they don’t make ’em like they used to’ is commonly used to describe action films these days. This is why the old-fashioned approach that writer/director Christopher McQuarrie takes in adapting the 2005 novel ‘One Shot’ for the big screen makes it such a stand-out crime thriller. Devoid of digital augmentation, “Jack Reacher” has the type of heart – and punch – that I sorely miss from the ’80s, an era when the camera remained steady for fight scenes and car chases were dependent mostly on the talent of stunt drivers to do the work. It’s the same reason I loved McQuarrie’s first feature “The Way of the Gun”(2000), which was defined by its brutal simplicity and didn’t seem like it was trying too hard to prove anything. 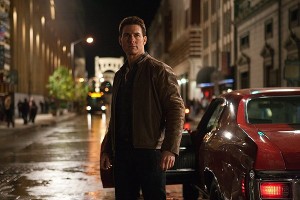 While much less bloody than that film, “Reacher” – named for the mainstay of Lee Child’s ongoing book series – certainly has something to live up to, so to speak, both with McQuarrie’s screenplay and Tom Cruise, whose incarnation of the title character is a whopping 9 inches and roughly 100 lbs. less imposing than the fellow imagined in the novels. The casting decision has taken heavy criticism, and understandably so – if you recall “Interview With the Vampire”(1994), it wasn’t exactly an ideal match.

But before you scoff at the sight of ‘Tom Cruise Productions’ on the screen, you should know that the physical discrepancies are irrelevant – if not more exciting – for the film character. This is mainly because veteran fight choreographer Robert Alonzo tailors everything to Cruise’s build – lots of eye-gouging, wrist bending, groin kicking action – that is believable for someone of his size. There’s a scene in which he’s approached by five guys at a bar because, from what they’ve gathered, he’s suggested that their ‘sister’ is a whore (you’ll find out why later). Reacher makes their lives miserable in the parking lot, an incident which is preceded by several of his warnings (“remember, you wanted this”, is his final comment before he starts breaking bones). But, like just about everything else in the film, this skirmish happens for a reason – not just to reinforce that our hero can beat up multiple bad guys at once, but also as a plot development – which is why “Reacher” is smart and surprisingly engrossing. 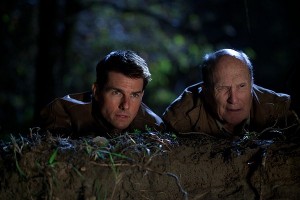 The film follows the book pretty closely, additionally summarizing Reacher’s badass résumé (think of Richard Crenna’s dramatic build-up of Rambo’s skillset) for those not familiar with Child’s character, since ‘One Shot’ is actually the ninth book in the series. A decorated soldier and ex-military cop who two years prior removed himself from service and vanished into thin air, Reacher shows up in Pittsburgh after a war veteran who’s been accused of picking off five seemingly random people with a sniper rifle asks for him by name. With contention from District Attorney Alex Rodin (Richard Jenkins, “Killing Them Softly”) and Detective Emerson (David Oyelowo, “Lincoln”), Reacher is hired by the D.A.’s daughter, defense attorney Helen Rodin(Rosamund Pike, “Wrath of the Titans”) to investigate the crime.

There’s not a ton of mystery here, considering the man we see shooting from a distant parking garage in the opening scene of the film is not the same person that has been detained by the authorities. The real sniper is a man named Charlie (Jai Courtney, the upcoming “A Good Day to Die Hard”), a talented sociopath whose dirty work is not limited to the use of a high-powered rifle. Though his motive is initially unknown, we understand that there is some element of misdirection to his actions; Reacher picks up on this right away, because apparently the suspect they have in custody, a man named James Mark Barr, was only a so-so shot. 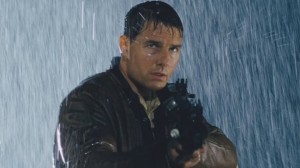 Reacher is portrayed as a brilliant investigator who reads human behavior like a psychoanalyst. The real fun of the film is watching him knock down doors to discover  things that have already been revealed to us, then surprise us with a few things that  haven’t. Cruise has no problem conveying emotional detachment without seeming soulless, as his motivation to serve justice is unwavering.  He operates without worrying about the law, as long as his means don’t compromise his moral code, which surfaces quite often. In a violent but humorous scene in which Reacher incapacitates  three crystal meth dealers in close quarters, he ends up taking the keys to a classic Chevy Chevelle SS,  but not before establishing with the vehicle’s owner that he’s borrowing it, not stealing (even though he has the guy’s finger twisted in a trigger guard when asking).

But the highlight of this film is an old-school car chase in which Cruise does all his own stunt driving (surprise, surprise). Like “Ronin”(1998) and last year’s “Drive”, it pays homage to films like “Bullitt”, where they did things the hard way. I can’t remember the last time I heard so much burning rubber on-screen; it gives the film a classic, pulpy feel.  A weathered, never-better Robert Duvall as a gun range owner who holds a few pieces to the puzzle rounds out the cast nicely. If “Jack Reacher” is the beginning of the next big action hero franchise, then I think the sub-genre is headed in the right direction.