Posted by Michael Parsons on November 21, 2012 in Movie Reviews / No Comments

(This review was originally published on November 21, 2012 at Reel Film News)

A noticeable result of putting a career stuntman in the director’s chair is the minimal presence of CGI, as exemplified by “Act of Valor” earlier this year. This might be the only redeeming aspect of “Red Dawn”, which suffers from terrible dialogue, nondescript performances and the typical ‘smoke and mirrors’ editing that ensures a PG-13 rating. 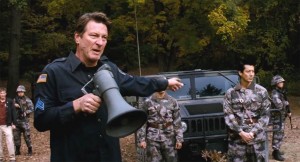 This new iteration of John Milius’s 1984 cult hit, which critics might argue was not all that great to begin with (I’m not one of them), fails to qualify its cast as worthy replacements for the original ensemble, which included Patrick Swayze, Charlie Sheen and C. Thomas Howell as a group of high school students turned gun-toting freedom fighters. This time around, in an era when topics like this are being treated more seriously than ever, the triumphantly exclaimed “Wolverines!!!” is likely to get more laughs than applause.

Typical of remakes, this one neglects almost everything that garnered the original film a loyal following, and doesn’t bother giving us a remotely plausible explanation until it’s long overburdened with montages and patriotic speeches. Simply replacing the ’80s plot line of the Soviets invading small town America with the modern threat of an attack from North Korea (I think the film pulls a “M*A*S*H*” regarding the opponent, if you get my drift), who are equipped with some nifty technology, is not enough to ‘update’ the film all on its own. “Red Dawn” 2012, which long time stunt co-ordinator Dan Bradley directs from a script by Carl Ellsworth (“Disturbia”) and Jeremy Passmore, is missing the attitude of its predecessor, replaced instead with such memorable one-liners as, “That’s not a plan! It’s a sh**t sandwich without the bread!!!” Sure, the explosions are bigger and more numerous, but that only makes it a passable by-the-numbers actioner; the tone of the ’84 version, which was literally the PG-13 prototype, was considerably more cold-blooded and emotional. Even the most important, character-defining scene, in my opinion, has been all but excised here. 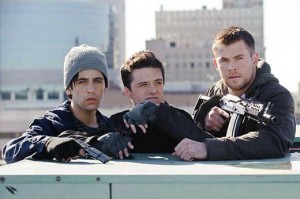 At least “Red Dawn” doesn’t waste our time with much exposition or character development. Chris Hemsworth (“Thor”) steps into Swayze’s role as Jed, a character refashioned as a marine who is home between deployments. He is one-dimensional and disconnected. A miscast Josh Peck (the “Drake and Josh” Nickelodeon series), plays the mildly rebellious younger brother Matt, who harbors anger toward Jed for his absence after their mother’s passing. Matt is the star quarterback for the Wolverines, the high school football team, and is in love with his cheerleader girlfriend Erica (Isabel Lucas). These relationships are carried out like an over-played, under inspired CW drama.

But Bradley gets right into the action, and rarely lets up. At roughly the five minute mark, the morning after a widespread blackout, we see hundreds of military planes and countless parachutes descending upon the quiet suburbia of Spokane, Washington. Why Spokane? Well, you’ll sort of find out later, when we’re introduced to Jeffrey Dean Morgan(“Watchmen”) and an interesting team of metaphor-spewing marines. But I’m getting way ahead of myself. 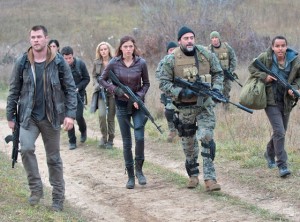 The brothers narrowly escape from their neighborhood (in a fairly lengthy and admittedly engaging chase sequence), collecting a few friends on the way out as they navigate a barrage of machine gun fire in their pick up truck, and head to temporary safety at their family cabin. It’s not long before their place of refuge is compromised, and they witness their father, a steadfast police sergeant (Brett Cullen), get executed by the ruthless, stereotypical villain, a North Korean captain (Will Yun Lee). He remains mostly expressionless throughout the film, which, with an exception or two, progresses as predictably as the trailer would have you believe.

In its down time, which to the film’s benefit is minimal, I could feel it struggling during its attempts at being sentimental. All the conventions, clichés and formulas are there, and the supporting  cast, including Josh Hutcherson (“Hunger Games”), Adrianne Palicki (“G.I. Joe: Retaliation”) and Connor Cruise (“Seven Pounds”) feel like toothpicks under its $75 million budget.  As a big fan of Hemsworth, I was disheartened to see him reduced to an angry, order-barking babysitter; conversational scenes don’t amount to a whole lot, and it’s difficult to take any of the characters seriously. Peck’s performance as his brother, who consistently defies orders (and common sense) like a twelve-year-old, grows tiresome very early. However, even as a first-time director, Bradley is smart enough not to remain in these moments for too long; at almost two hours, the lulls account for only about 15 minutes of the film.

Despite all the criticism, I found the film entertaining enough to serve as a mindless distraction. The prominence of live-action is refreshing, though it’s a shame that it’s often edited into oblivion. “Red Dawn” never had much of a chance at being a great film, but it should have been so much better.