Posted by Michael Parsons on September 7, 2012 in Movie Reviews / No Comments

(This review was originally published on September 7, 2012 at Reel Film News)

I felt I had to weigh in on “Compliance”, which poses as an examination of human behavior in order to feed us more of the exploitative garbage that I was hoping would eventually fade from contemporary cinema. I know, what a ridiculous and unrealistic thought that is. As of this writing, the film has garnered an 89% fresh rating on Rotten Tomatoes, a collection of accolades that perplexes me. To borrow a note from Roger Ebert, who shared a similar sentiment for a different well-received film earlier this year: “I am dismayed”. 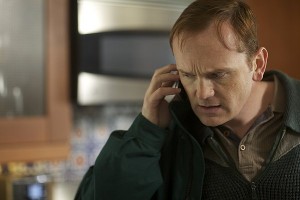 By about the halfway mark of this abusive exercise, which is at least merciful enough to contain itself to 90 minutes (I use ‘merciful’ loosely – I assure you, it still feels like it’s going to go on forever), I felt about as mentally shellacked as Becky (Dreama Walker), a young fast food chain employee who becomes the victim of a twisted prank caller. I’m not sure who I have more disdain for – the perpetrator of the crime, a man impersonating a police officer who takes his perverse control fantasies out on fictional characters, or writer/director Craig Zobel for assaulting his audience’s intellect with such nonsense.

To preface my further criticism (of which I could compose a thesis), I was anxious to see this film, mainly because it was purported to be an intelligent, extremely tense composite of over 70 cases in which people impersonating figures of civil authority were able to manipulate unsuspecting prey simply by telling them what to do over the phone. It has an interesting premise, one that is plausible for the first half hour or so, when a man (Pat Healy, “The Innkeepers”) identifying himself  as an ‘Officer Daniels’ convinces the store manager Sandra(Ann Dowd, “The Art of Getting By”) that Becky has stolen money from a customer. Detaining Becky in the back room, Sandra follows the officer’s instructions to the letter, even when the demands become so unusual that even the biggest half-wit would have started to question them. Extremely tense indeed, but this ordeal is about as intelligent as how Zobel apparently perceives typical working class Americans. 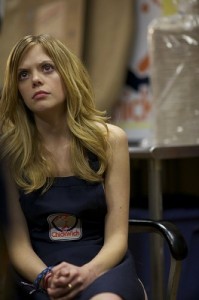 What begins as an interesting study of human nature, particularly society’s inherent fear of authority, digresses into an indulgence of what I can only describe as ‘non-violent torture porn’. Until you witness the lengths to which the film stretches (which goes well beyond gullibility into unbelievable cruelty), you might still think it sounds interesting. Believe me, the point that it’s claiming to make is achieved in the first 40 minutes; people blindly accept authority, but Zobel would have us believe that humans are programmed to obey unconditionally. Would an average person invite someone claiming to be a police officer into their home without first seeing a badge? I wouldn’t.

The only thing saving “Compliance” from receiving an ‘F’ grade is Walker’s performance, whose character endures degradation beyond what any conceivable scenario in a civilized world should present, especially from people that she knows. Her efforts shouldn’t go unrecognized (if you want to see her in something worthwhile, I suggest the ABC series “Don’t Trust the B**** in Apt 23”). In my mind, Becky’s co-workers are just as villainous as the main antagonist, if for nothing else than the level of ignorance that we’re supposed to believe exists collectively in one establishment. Based on true events or not, this film comes across like one big insult after another.