Posted by Michael Parsons on October 20, 2011 in Interviews / No Comments

(This interview was originally published on October 20, 2011 at The Rogers Revue)

Cathy Rush became a basketball icon when she led Immaculata College, a small Catholic girls school near Philadelphia, to three back-to-back AIAW titles from 1972-1974, continuing to a total of six consecutive Final Four appearances by 1977. The Mighty Macs, as the team is known, lost only 15 of 164 games during that streak, emerging with legendary status and proving a major influence in college athletics. The upcoming film “The Mighty Macs” is the story leading up to their first championship win in coach Rush’s game changing ’71-’72 season that began with no gym and no budget. I met with the Basketball Hall of Famer to hear firsthand about her phenomenal career and the story that inspired the movie.

MICHAEL PARSONS: I saw “The Mighty Macs” last week. I thought it was an incredible story. I suppose you’d be the best person to ask about that….

CATHY RUSH: Well, I’m not sure…. (smiling) in fact, with all the people that were [at the original screening], it was interesting to hear other points of view. Tim Chambers who is the writer, producer and director of the movie,  [Katie Hayek] who plays Trish Sharkey in the film, a beautiful young woman – she had actually developed lymphoma right before screening. She’s fine, this is now four years out and she’s doing great. But it was interesting getting questions that were directed at the writer – what was he trying to do, did we think the portrayal was accurate, and from [Katie’s] point of view, how all the girls came together and really felt they were a team.

MP: Is the film relatively accurate?

CR: It is very close. I have two sons, and as they were growing up they’d get into an argument over something and I’d sit them down and say, “There are three sides to every story. There’s your side, there’s his side and somewhere in the middle is what actually happened.” Tim Chambers interviewed me, then he went out and interviewed the players. They’d start telling a story, and I’d say, “I don’t remember that!”  I think the movie is accurate in the setting, the nuns’ support and the community. It was amazing – an all girls Catholic college…. it’s not as if we were at a coed school where the men’s team  was ranked above us. We were top dog. The nuns loved these kids and our kids really responded to that. I think that portrayal is accurate.

MP: What was your mindset when the season started?

CR: It was a building process. Immaculata had no budget. Not a small budget, no budget. The kids would find their own rides to the games. I’d say, “We’re playing at St Joe’s tomorrow, see you there at six.” And they’d all show up. In fact two of my players were in a car accident. One of them was my best player and she had broken her collar bone. Today, nobody would travel without a bus or permission slips.

MP: Did you spend much time on set? 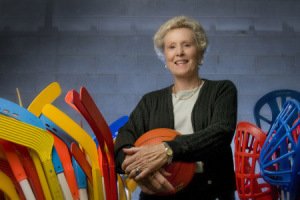 CR: The rotunda, during the pep rally scene, I was actually there that night. I was on the second floor as they were shooting it. The fella standing next to me was a local reporter for the Inquirer in Philly. As the team came in the people started cheering, I turned and looked at him and we were both crying. It was remarkable the way it was set up. We had lost a game, we were dejected…. in the first four years I think we only lost two games. It happened to be Ash Wednesday. To see that recreated so accurately brought me to tears.

MP: You played ball at West Chester, but you had no coaching experience prior to Immaculata?

CR: I had coached a junior high school team the year before.

MP: So you’re going into this thinking, here’s a very small Catholic girls school with no team and financial issues. Did you realize at some point that this might have been about  more than just saving a basketball team?

CR: Well, even today, a lot of small schools are still on the edge. At that time, Villanova and St Joseph’s had been all male, Immaculata and those schools were all girls. Then Villanova and St Joe’s started admitting women.The fact that Catholic girls could now go to these schools, enrollment at all of the all-girl catholic schools was diminishing. But all of a sudden because of the team we had notoriety and Immaculata was in the press, so that helped. (Laughing) What really helped is that they recently went coed.

MP: What was your initial plan with this job?

CR: I turned twenty-one in April of my senior year in college. I graduated in May on a Sunday and I got married the following Saturday. Now that was a sixties woman. That’s what we all did. My life plan was to get married, work for three years, have a family and never work again. My husband was a referee in the NBA, and at that point they were really on the road for an extended time. A friend called and said a job at Immaculata had opened up. As a West Chester player, I’d actually played at the old Immaculata gym that had burned down before I worked there. So I knew what it was like, I’d seen their team. (Laughing) I tend to be a ‘personality’ and I want to win…. but I went in thinking this would be a low key job. It’ll give me something to stay in sports, but no pressure, no hype.

MP: Then you go on to win three consecutive championships.

CR: We were in the Final Four six straight years. But athletics were changing. Title IX came in maybe around ‘71, but it wasn’t implemented in the national tournament until 1975. Now teams that offered scholarships could play in the national tournament. When I started at Immaculata my team was basically freshman and sophomores, those were the greater players. As time went on, I found myself with five or six seniors, three or four juniors, two sophomores and a freshman. The really good players were getting offered scholarships to go someplace, and Immaculata had decided that they would’t offer athletic scholarships. So I knew the era of small college success was ending. I left in ‘77 with every intention of getting back into coaching, but I never did.

“The message all along is an equality of dreams,” she says. “I was at a banquet the other night and I said I was a sixties woman. We didn’t have big dreams, we didn’t think that we could be anything like the girls do today. Now, whether you’re black or white, male or female, rich or poor, everybody can dream big.”